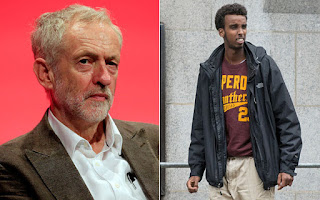 Meanwhile on Another Television, deep in the east wing of Mansion Sue, BBC news 24 was broadcasting a report of same case. Only the BBC did not read out any names. As far as that particular viewer of BBC News could tell, the perpetrators were ‘men’.

Admittedly, this is hearsay, so if he got it wrong do correct me, but it was odd and enough and awkward enough to be a matter of some incredulity on the part of that viewer; worthy of more than one “I don’t believe it” and a few ‘unbelievables’.

As you will know by now, the scam in question involved the theft of thousands of pounds. Later in the day it emerged that the stolen money had been diverted for the selfless purpose of jihad in Syria.
To complicate matters further, last May Jeremy Corbyn had arranged for his constituent Mohamed Dahir to be released on bail pending the trial.

Corbyn’s pleading letter was even produced a second time in the hope that it would secure bail once again between the guilty verdict and the sentencing for Corbyn’s Islington constituent. (This time it was unsuccessful.)

The story was getting bigger by the minute. The whole Dahir family say they are Corbyn’s friends. They don’t say whether they are “friends” or personal friends, but their statements imply it’s the latter.
After that bombshell the perpetrators’ identity had to be fully revealed by the BBC, which it duly was.  Couldn’t really sweep all that under the rug, could they?