Other than The Andrew Marr Show my encounters with the BBC today have been confined to three Radio 4 programmes. Two were on my regular Sunday 'beat' - Sunday and Broadcasting House - and the other was prompted by reading a comment at Biased BBC slagging it off.

That last one was Chrismukkah and Other Cultural Mash-ups. The commenter at Biased BBC described it in the following way:

More multi culti pro mixing from the BBC, with an attack on Christmas, which again should be ‘holidays’ or some other non ‘offensive’ word!

They seem so ignorant of what Christianity is about, that they honestly believe Father Xmas, Xmas trees, & Easter Eggs are somehow mentioned in the Bible and part of the religion!

I have to say that I didn't think it was an attack on Christmas (or that most of her other criticisms applied either), but the claim that it was "multi culti pro mixing" is undeniable. It was very obviously and openly that.

The presenter, Sharmini Selvarajah, who has previously worked for the BBC and the Sutton Trust and now works for the House of Commons, has the following Twitter profile: 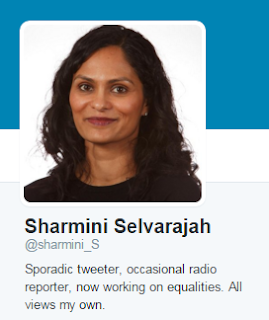 She was never anything less than open about her enthusiasm for multiculturalism and cultural mixing here.

What to make of her programme?

Well, I found it fascinating from start to finish. And I found myself strongly warming to pretty much everyone who appeared in it. And I learned a fair few things too.

Sharmini, of Hindu heritage, used her own part-Jewish family as a test case for Chrismukkah - an American-born fusion of Christmas and Hanukkah that has been embraced by some Jewish families but strongly resisted by others. Sharmini's own (Jewish) husband and her mother-in-law have reservations; Sharmini has none. Their discussions about it were absorbing and thought-provoking.

Their local rabbi, Jonathan Romain, was struck by the star atop the family Christmas tree - a star of David in the blue and white colours of the Israeli flag.

For a rabbi of the Reform Judaism persuasion, Jonathan sounded suitably 'tolerant' if slightly uneasy.

The presence of Rabbi Jonathan Romain - the most regular rabbi to appear on Radio 4's liberal religious current affairs staple Sunday - points to where this programme was coming from though. Everyone was 'progressive', religiously-speaking. 'Orthodox', 'traditional', 'conservative' and 'fundamentalist' believers were conspicuously absent from this delightfully upbeat programme.

Even the hijab-wearing Muslim sisters of a Christian family who neglected neither Eid nor Christmas were presented as being 'tolerant'...

This was then, in brief, a lovely BBC Radio 4 programme celebrating multiculturalism - and however charming it may have been (and was), that fact is undeniable.

That the BBC commissioned it shows their unquenchable pro-multicultural bias.

That it was, despite that, still enjoyable and engaging shows the presentation skills of Sharmini and the likeability of her friends and family...and the BBC's nous.
Posted by Craig at 20:20

Labels: 'Chrismukkah and Other Cultural Mash-ups'