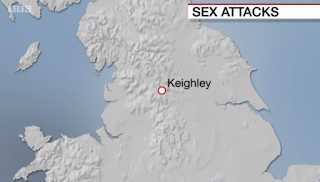 Commenters at Biased BBC have observed that yesterday's news of the conviction of 11 members of yet another paedophile gang in West Yorkshire for the prolonged sexual abuse and rape of a 13 year old white girl hasn't received prominent coverage from the BBC.

Though the story broke yesterday evening, BBC One's flagship News at Ten gave the story no coverage whatsoever - which, given its seriousness, is surprising.

The story was, however, reported on the BBC News website, in the Leeds and West Yorkshire section - though it takes some finding:

And the local BBC news programme BBC Look North did give it some coverage last night as well.

The nature of that coverage, however, quite took my breath away.

It provides one of the most striking examples yet of the sheer lengths the BBC will apparently go to to play down the overwhelmingly 'Muslim' nature of these sick grooming gangs, doubtless in the interests of maintaining 'social cohesion'.

In the BBC Look North coverage no clue was given as to the backgrounds of the gang members - not even their names. The girl's ethnicity also went unreported.

Those can only have been deliberate editorial decisions by the BBC.

Here is a transcription of the report in full:

Newsreader: Now in other news...Twelve men will be sentenced in February for the systematic rapes of two young teenage girls in Keighley over a three year period. Eleven were found guilty by a jury at Bradford Crown Court today but three were cleared. Another man had pleaded guilty to five rapes before the five-week trial began. Our crime correspondent John Cundy has more.

BBC reporter: The rapes happened at several sites around Keighley between 2009 and 2012. The main victim, aged 13 to 14 at the time, was described as "vulnerable" and "from an unhappy family background". The organiser of her ordeal used the girl as his drug courier and sexually exploited her. He's never been arrested and is believed to have fled abroad. The jury took three days to reach their verdicts. There was uproar in the dock and the public gallery of Court 3 here at Bradford Crown Court as the verdicts were read out. Fifteen security officers and four police officers had to restore calm. The judge, Roger Thomas QC, said the behaviour of some of the defendants during the five-week trial had been the worst he'd experienced in 40 years, "insolent, arrogant and disrespectful".

DCI Chris Walker: These young girls were preyed upon and either raped or sexually assaulted. One was even passed around these men for no other reason than their own gratification.

BBC reporter: A serious case review by Bradford Council is under way. The twelve men will be sentenced in February. John Cundy, BBC Look North, Keighley.