For those of you who still haven't yet seen this, here's a leaked internal BBC memo from David Cowling - former editor of the BBC Political Research Unit (now no longer with the corporation). It sends a warning to his (then) BBC colleagues: 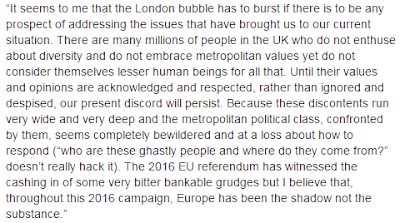 Though his claim that "Europe has been the shadow not the substance" is in keeping with his former line of thinking, Mr Cowling (now of KCL) makes some prescient points there, doesn't he?

Will the BBC take them on board now? From what I've seen of quite a lot of the BBC's coverage since the result of the referendum, I rather doubt it.
Posted by Craig at 13:06