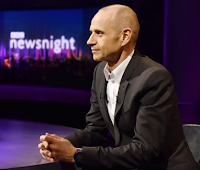 Here's how things have gone since ITBB's last post on the subject:

By my reckoning that changes our running total, which was:

,,,which is something of a regression back towards pro-Remain bias.

As for the sub-trend of regarding who gets most of all of the solo appearances (i.e. not in joint interviews), well, we left that at:

I now make that:

...with Remain fast approaching double the number of one-person interviews that Leave has been invited to attend.
Posted by Craig at 20:19