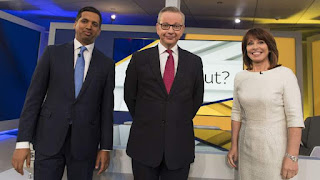 I haven’t watched much TV lately, but something I did watch last night was the ‘Leave’ show, starring Michael Gove and Faisal Islam on Sky. Also present, Kay Burley and “the public”.

Faisal Islam seems to have turned into Mehdi Hasan. That irritating, non-stop hectoring style is just up Mehdi’s street. I’m really surprised that no-one has mentioned it.

In spite of – or maybe because of – being relentlessly barracked and harassed by Faisal Islam, Mr Gove won the room. He repeatedly got spontaneous applause from the audience. In fact, he seemed to gain in confidence as he went on, looking amused rather than defensive even when Islam absurdly likened him to Mr Trump.

I didn’t see the ‘Remain’ show, starring David Cameron (and I haven’t caught-up with it yet) so I don’t know if Faisal Islam was just as exasperating and intrusive with Dave as he was with Mike, but relentless pursuit of a yes/no answer to an ill-conceived ‘killer’ question is pure Mehdi, and a bit Mishal too.

No, Faisal made matters much less clear with his obtrusive interventions. A skilled, less terrier-like interviewer would have calmly let the questions and answers flow, one after the other. We would have learned more.

From the reaction of the MSM, I really did wonder whether I’d watched the right programme. Maybe they’d been watching the real one and I’d somehow stumbled upon the dress rehearsal.

The chap in the audience who compared  Gove’s ‘Leave’ advocacy to a World War 1 general waving the flag and saying "over the top, men!” did have a point, but prediction is not a science, and that particular argument is predicated upon the certainty and stability of a turbulent and unstable EU, which of course there  ain’t.