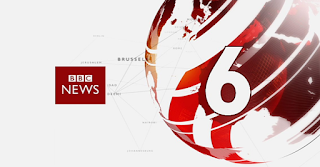 And here's an update on our monitoring of BBC One's News at Six and its weekend equivalents' choice of EU referendum-related angle - as ever defined as "which side's angle comes first in either the headlines or the whole bulletin".

We left it with a startling:

Here's how things have gone since that last post:


31/5 Tempers fray about the EU referemdum. Meanwhile campaigners to Leave call for VAT on energy bills to be scrapped

1/6 Take back our immigration policy by exiting the EU, say Leave campaigners.

2/6 The German chancellor Angela Merkel intervenes in the EU referendum debate suggesting the UK is unlikely to get a good deal if it leaves. Meanwhile, Jeremy Corbyn says the case for staying in the EU and rejects criticism that Labour isn't getting its Remain message across.

3/6 He's accused of scaremongering but the boss of one of the world's biggest banks says jobs could go if the UK leaves the EU.
Jamie Dimon, chief executive JP Morgan: After a Brexit, we cannot do it all here.  And we will have to start playing for that. I don't know if mean a thousand jobs, 2000 jobs. It could mean as many as 4000.

5/6 A former prime minister launches a scathing attack on the campaign for Britain to leave the European Union. Sir John Major, who wants Britain to stay in the EU, says the claims being made by Leave campaigners are deceitful.
Sir John Major: What they have said about leaving is fundamentally dishonest and it's dishonest about the cost of Europe.

6/6 Just over a day to register to vote in the referendum. Millions haven't and opinions are divided.
Vox pop 1: I'm going to vote Stay which is probably what you don't want to hear.
Vox pop 2: Years ago we used to be Out and we managed fine.

7/6 The Archbishop of Canterbury attacks Nigel Farage . He says some comments on immigration legitimize racism.

8/6 The EU referendum. The voters registration deadline is extended after the website crashes.

9/6 A warning from two former prime ministers: leaving the EU could tear apart the UK and threaten stability in Northern Ireland. Sir John Major and Tony Blair, speaking in Londonderry, from different parties but one message today.

10/6 Labour insiders tell the BBC increasing numbers of their supporters want to leave the EU.


Frankly, suddenly things have got slightly complicated. It's not beyond dispute on some occasions here (unlike previously) to decisively assign some of these to one side of the EU referendum campaign to the other. For example, though citing Remain concerns, is the 10/6 one helpful or unhelpful to Remain? (It's so double-sided I can't assign it to either side). And can we give the 6/6 one to Remain just because the pro-Remain vox pop came first? (No, in my opinion). And is Jeremy Corbyn saying something not very specific helpful to Leave or Remain. (I'll assign that to pro-Remain as it's a sort-of pro-Remain statement from someone who's supposed to be in the Remain camp).

Still, by my reckoning that's: 2 more for Leave and 6 more for Remain, changing the ongoing total to:

...which, as you might have spotted for yourselves, is still an exact 3:1 imbalance in favour of Remain (as it was last time).

Please check these figures out for yourselves though. If you disagree, please point out why below.
Posted by Craig at 20:20