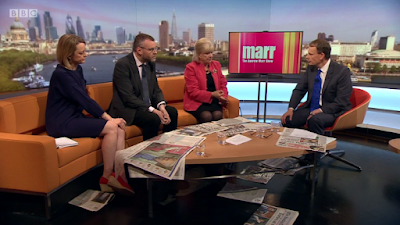 Laura K was there all night for BBC One's referendum coverage.

Like David, who 'live blogged' the results on a comments thread below, I felt as if she looked - especially as the night went on - as if she'd been crying prior to her every single contribution. Either that or she was extremely tired.

Knowing what I know about the unrelenting hatred for her from the Corbynistas, I gulped when her BBC One news bulletin reports in the immediate wake of the BBC's official calling of the referendum for Leave included some somewhat sarcastic-sounding criticisms of Jeremy Corbyn's underwhelming role in the campaign. I knew exactly what that would result in (and, checking Twitter, it did result in that very thing).

(From my experience, 'somewhat sarcastic-sounding' is her default tone of voice when presenting reports for BBC bulletins).

And the poor thing was a paper reviewer on this morning's Andrew Marr show.

I gulped again when she, of all people, was invited to talk about the attempted coup against Jeremy Corbyn and was struck by how - in relating the story of the sacking of Hilary Benn - she kept on calling the Blairite Mr Benn "Hilary" whilst slipping into calling Mr Corbyn "Corbyn", and how she kept on stoking the story in a way the Corbynistas emphatically wouldn't have liked.

I didn't think that would help her either. 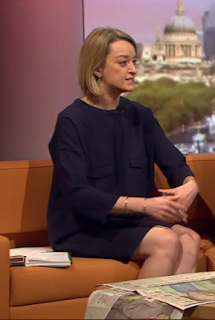 Trying to stand back and blog impartially about this, was Laura wrong to make criticism of Mr Corbyn one of the angles in her initial BBC One reports? And was she wrong to call Mr Benn "Hilary" so often whilst slipping into calling Mr Corbyn "Corbyn" (as if she was some kind of Blairite insider)?

On the first one I will give her the benefit of the doubt. The Labour leader's role in the referendum was equivocal, to put it mildly. The subsequent post-referendum spate of resignations from the shadow cabinet have shown that Laura K was onto something (though Corbynista diehards are free to air conspiracy theories that Laura K was 'in on' the conspiracy and helped give it a fair wind via the BBC).

On her repeated use of "Hilary" for Hilary Benn and her parallel slip in calling Jeremy Corbyn "Corbyn", well, I think that calls for an 'Hmmmm!' at the very least.

I certainly think it's beyond dispute that she's not biased in favour of the Bearded One.


P.S. And the plot thickens. The aforementioned Laura K has been at the forefront of this afternoon's major breaking news story concerning claims from Labour "sources" and documents leaked to the BBC, that JC's office "deliberately sabotaged" the EU Remain campaign.

That isn't going to help her either with the Corbynistas! (though I can't imagine the Blairites and Brownites disapproving, of course!)...

...though it might earn Jeremy Corbyn some grudging admiration from some Leave supporters, if true!!
Posted by Craig at 19:15