"I think maybe now it was the wrong decision" 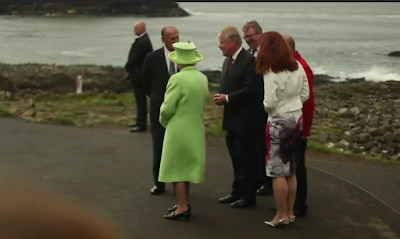 BBC One's News at Six may not have mentioned President Obama's upbeat remarks about post-Brexit Britain but it did include a piece about the Queen visiting Northern Ireland - HM's first official engagement since the Leave vote from well over 17 million of her loyal subjects.

As soon as I heard it announced I braced myself. 'What doom-mongering angle will the BBC go for now?', I thought, expecting the worst (given much of the rest of the BBC's post-referendum reporting).

'BBC Ireland correspondent' Chris Buckler, adopting a glum tone of voice throughout, was quick to talk about how un-United the Queen's Kingdom is now in the wake of the referendum. The vote, he said, has "led to uncertainty for the whole UK",

But, he continued, even some Unionists who supported "waving goodbye to Europe" are now feeling full of "worry".

[Of course, those Unionist probably supported 'waving goodbye to the EU' rather than 'Europe', but that's BBC reporting for you at the moment!]

We heard from one such worried Unionist (worrying about the break-up of the UK), and then from a Unionist Leave voter, challenged by Chris Buckler in the following fashion:

Chris Buckler: But you voted Leave, so you're responsible for that!

The "good-natured meeting" between the Queen and Martin McGuinness of Sinn Fein was said to show "how much things have changed" over the course of the Queen's reign, Chris continued, before saying, "But, politically, these are turbulent times", Northern Ireland "as a whole" voted Remain.

And then it was onto what Sinn Fein and nationalists want - to stay in the EU and to unite Ireland. Here both 'vox pops' were of the same (pro-EU, pro-united Ireland) frame of mind.

I've seen quite a lot of Chris Buckler in recent days. (He even featured in an image I used to 'show' how gloomy BBC reporters were looking on Friday morning). I believed I've summarised his report fairly. Was this 'impartial' reporting from him?

And this piece of anti-Brexit gloom-mongering was projected to a wide audience on BBC One's widely-watched main evening news bulletin.

What is getting into the BBC at the moment?
Posted by Craig at 21:58