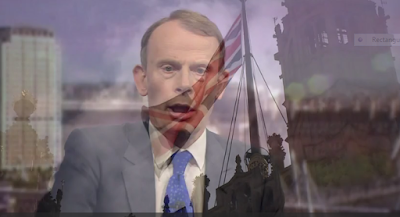 Sticking with the Marr programme, I was heartened that the news bulletin noted the anniversary of the Islamist slaughter of 38 tourists - including 30 British tourists - in the Tunisian resort of Sousse but, disturbingly, the bulletin avoided any mention of Islamism.

It merely described the terrorist atrocity as being an event where "a lone gunman went on a rampage".

Is the BBC retreating on reporting that story honestly too?

Andrew Marr then teamed up with Andrew Neil to deliver a striking joint 'op-ed' on the EU referendum (prior to the paper review).

Neither said anything that hasn't been said elsewhere a thousand times already, but both - especially Andrew Marr - delivered it with feeling, as if it was 'something worth listening to'.

So let's listen to what Andrew Marr said...

His main point was that Britain is "deeply divided" and "not one country". There's a "yawning gap", he said, between "the posher, better-educated, richer" parts of the UK and "the huge swathes of post-industrial, ex-mining and struggling fishing and agricultural Britain".

So much, so gloomy.

Today's campaigners aren't to blame, he continued. We've been declining for the last 50 years. "Under our last 5 prime ministers we became a shopping nation" (thus, by counting back, locating the problem as starting under Mrs Thatcher). London prospered but the political and media class ignored "industrial Wales, the Black Country and struggling coastal towns", which became "ever poorer, ever more desolate". 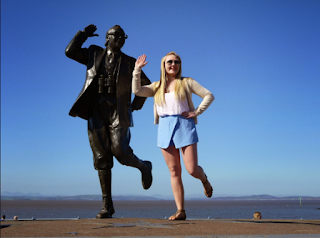 We're, of course, not struggling in the slightest here in Morecambe, and not remotely desparate. We're on the rise again.

Please, please, PLEASE come and visit us. I beg you, on bended knees, PLEASE!

We've got lots of excellent new restaurants, a lovely upgraded promenade and stone jetty, the relaunched Art Deco Midland Hotel (as featured in ITV's Poirot), some provocative rusty modernist architecture, a splash park to delight the kids (near to where Blobby Land used to be), new play areas to delight the older kids, several tattoo parlours, the Eric Morecambe statue (on a par with the Angel of the North and Nelson's Column), lots and lots of car parks, a Brexit-supporting Wetherspoons named in honour of Eric Morecambe, and spectacular views - from many angles - of Morecambe Bay, the Lakeland hills and the Pennines. What's not to love?

And so should Polly Toynbee, if she can even bear to tear herself away from her beloved Tuscany. I'd happily let her call me a bigot. I'd even buy her an £8.50 ham-and-pineapple pizza at Frankie and Benny's to make her feel as if she was back at home in her former Italian villa).

Mr Marr then talked of the "waves of migration and globalised culture" that "washed among us, eroding our sense of self". The change of "colour and language" left "older people bemused and cut off", he said.

The influx of "eager, white, hard-working" East Europeans "alarmed" the poor parts of the country. The "self-confidently multi-ethnic, liberal, urban class" was "having such a good time they barely noticed".

He went on: "London spoke a lot but didn't listen. Well, it's heard now. This has been the rebellion of the diminished against the cocky, the ignored against the shapers of modern times, and the struggling against the strutting." 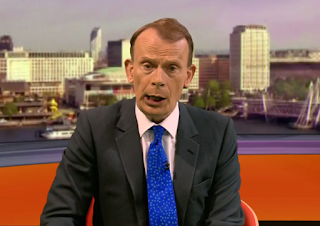 His concluding passage, delivered with a rhetoric flourish, said: "We are still today a lucky country, able to fashion our own future and with a wonderful history. But we are also divided, full of bad feelings and in choppy seas, still searching around for a rudder."

I might have been brainwashed by BBC bias here, but I can't find much to disagree with there...

...though the language suggests a typical 'liberal' struggling to be 'honest' in the face of a massive 'shock'.

And the polls have long suggested that concerns about mass immigration extend well beyond "older people".

Plus, naturally, I thought he was describing his own circle - including much of the BBC - in his description of the "cocky", "liberal" urban class, and wished he'd admitted as much.

But you probably can't have everything, can you? (Can you?)
Posted by Craig at 20:59