"And the financial markets collapse"

For those, like me (and David Keighley at News-watch), who have shown (at the very least) that some flagship BBC programmes and some BBC reporters/presenters did show a pronounced anti-Brexit bias during the EU referendum campaign, it was startling and sobering to keep hearing from so many people who we like and admire and who usually agree with us about BBC bias (including prominent pro-Leave types) that they thought that the BBC had in fact behaved in an unexpectedly fair way and covered itself in impartial glory.

One of those people was Peter Hitchens. He wrote again a couple of days ago about "the creditable efforts of the BBC to be impartial, which I absolutely did not expect", having previously written, "I underestimated the BBC, which has, perhaps thanks to years of justified and correct criticism from people such as me, taken its duty of impartiality seriously". Interestingly, he now thinks that the BBC has reverted to type - since the referendum result came through:

Parliament is pro-EU. The Civil Service is pro-EU, the judiciary is pro-EU, the BBC is pro-EU and is now returning to its old bad habits after an admittedly creditable attempt at balance. Its 6am radio news bulletin on Friday said, falsely and dangerously, that the pound had ‘collapsed’ following the result and there will be a lot more of this foolish panic-mongering in days to come. 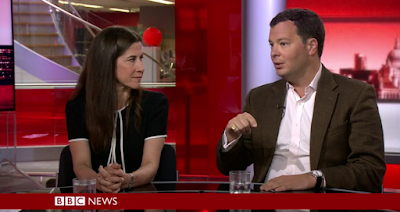 Britain leaves the European Union. The Prime Minister stands down. And the financial markets collapse. Plenty to talk about.

Alex Deane, who was on superb form throughout, didn't let that pass without comment:

No, hang on a minute. Let me answer the question who asked everyone else. The market didn't crash. The FTSE finished higher on Friday than it was last Friday. And it's extraordinary to hear someone from Bloomberg reinforce your false premise that there was a big crash or the pound slumped. The pound is where it was in February.

The 'someone from Bloomberg' he was talking about was Stephanie Baker. Along with French regular Agnes Poirier, she took the anti-Brexit line.

The final guest, German regular Thomas Kielinger, took up a position closer to Alex's. He may be a Europhile but he's always been a passionate Anglophile and thinks we'll prosper outside the EU. I found his contribution rather moving.

All credit to the makers of Dateline London for assembling such an interesting and varied panel. Less credit to Maxine for framing the debate in such a loaded, doom-mongering fashion.

Alex Deane's appearances on Dateline and a highly sparky Sky News paper review last night have - inevitably - drawn some very ugly comments at places like Digital Spy and on Twitter. Thankfully, Twitter has also deluged him in praise too - quite a few from Labour supporters saying how suprised and pleased they are to agree with him. Alex's response to the ugly comments on Twitter is usually to re-tweet them and add a good-natured joke.

Here's another of Alex's jokes today. It made me smile: