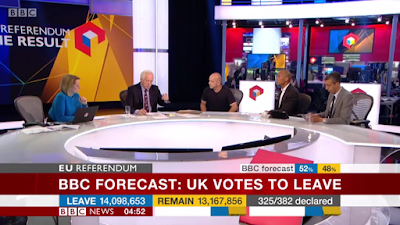 I feel the hand of history on my shoulder so I suppose I should begin with some insightful comments about the historic events of the past week: Fancy Iceland getting through to the knockout stages of Euro 2016! Who saw that coming?

On the other big Euro-related story of the week, I will continue to stick to my usual, narrow furrow. Never mind what it means, how we've got to where we are, and where we should go from here, I'm going to talk about the BBC. As David Mitchell's Shakespeare in Upstart Crow would say, "It's what I do!"

As I stayed up all night to watch the result of the EU referendum on the BBC I did think about live-blogging it, but decided not to. So thanks to David Preiser for stepping into the breach and giving us such a strong flavour of the night.

All I will say about it is that I found the BBC's election night coverage largely fair up until the moment when the BBC called it for Leave at around 4.40 am. (And I didn't even mind Jeremy Vine's "confusing" graphics.)

One of the two stand-out exceptions, bias-wise, up till that point, was the BBC's economics editor Kamal Ahmed, whose regular pronouncements on the plunging pound and use of that scary-looking graph were delivered in such a tone that he might as well just have gone ahead and announced , "The post-Brexit Apocalypse has begun. Told you so! Why didn't you listen to me?" 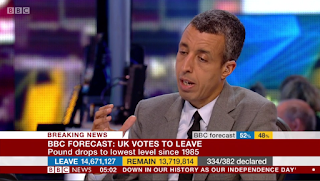 And his reports on the following day's main BBC One news bulletins stuck doggedly to that same plunging pound story - even after, by the time of the BBC One News at Ten on Friday, the pound had already substantially recovered. It was left to newsreader Huw Edwards to point that out, in a few words, just before Kamal's latest overwhelmingly gloomy report.

The other stand-out exception was the way Nigel Farage was repeatedly condemned and sneered at, on and off, throughout. Most of that may have come from their guests but the BBC reporters/presenters kept laughing along with the sneers and never once sought to challenge the criticism of the UKIP leader. UKIP ought to look into those moments very carefully. I'm quite sure my memory isn't playing tricks on me there.

The change in tone after the BBC called it for Leave was so startling that I laughed out loud. It was like something from one of those Chris Morris/Armando Iannucci media-mocking programmes from the 1990s. All traces of remaining jollity vanished. Grim faces and nothing but grim faces arrived from BBC reporter after BBC reporter....

....and so it stayed throughout the following day:

And for minutes after that announcement the caption across the bottom of the BBC's screen largely stuck to reading, "Pound drops to lowest level since 1985".

That mood has stuck on the BBC face, like after a changed wind in the old saying, ever since.
Posted by Craig at 13:05