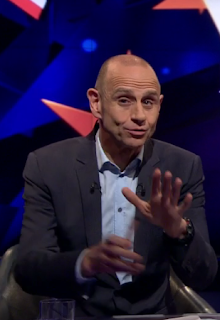 A few minutes after his successful attempt to talk over Crispin Blunt, Evan turned to camera and delivered what can only be described as "an editorial":

Now, economic forecasts are not very likely to be reliable but I thought you might be interested to hear how the City economists have changed their view about economic growth over this year and next.

The group Consensus Economics track all the reputable forecasts and average them up. And since the Brexit vote the average forecast for this year's British growth has been downgraded - this year by half a percentage point, next year the growth downgraded by 1.7%.

Now, what does that mean? If you believe the forecasts (you may not) by the end of next year the economy will be 2.2% smaller than it would have been if we'd chosen to remain.

The BBC man appears to be on a mission at the moment (and quite how it relates to 'BBC impartiality' is something of a mystery to me).
Posted by Craig at 19:27