Just for the record, neither BBC One's News at Six nor Radio 4's Six O'Clock News reported the brutal murder of a sleeping 13 year old Israeli girl, Hallel Yaffa Ariel, by a Palestinian man - news which has caused deep shock to the people of Israel.

The BBC News website has included it among the featured headlines on its home page though.

I note, however, that the BBC's online report hasn't used a photo of Hallel: 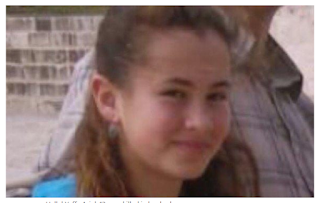 Nor has it include any quotes from her grieving mother, Rena - unlike, say, the Daily Telegraph.
Posted by Craig at 19:24