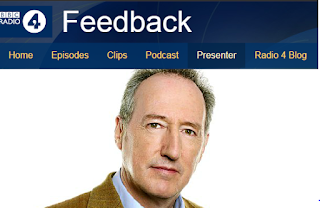 We are very much into 'complaints from both sides' territory here, but...

On this week's 'historic' Feedback 'EU referendum coverage special' all of the featured callers criticised the BBC's coverage from an anti-Brexit position.

Most of their complaints were so silly and demonstrably untrue that I ended up agreeing with the robust knock-downs delivered by the BBC's Ric Bailey - the usual 'we got it about right'-spouting senior BBC editor put up to appear on this edition Feedback.

For example, one caller complained that the BBC had failed to challenge Brexit campaigners over that '£350m a week to the EU' claim.

His complaint is absolutely absurd. That's something I've heard BBC reporters and interviewers doing endlessly, literally since Day One of the campaign. Evan Davis alone must have furiously challenged Leave supporters dozens of times on Newsnight. Today also kept on challenging Brexiteers over it. (It was still doing it last week). Mark Mardell kept on snapping at pro-Brexit interviewees over it too. When the BBC editors gathered for a mass debunking of stats on Today and a similar one on BBC One, that £350 figure was first up for debunking. More or Less kept on debunking it (on various re-incarnations of the same programme). The BBC website's Reality Check started with it.

And yet this Radio 4 listener failed to hear or read or see any of that, by the sounds of it.

Why did Feedback only invite anti-Brexit listeners to complain about the BBC, given that doing so might in itself bring down obvious charges of anti-Brexit bias against Feedback?

An obvious possible line of defence for Feedback here (not that I can imagine either the folk at Feedback or the average Feedback listener ever quite putting it like this!) might run as follows: "Well, that's only evidence that Feedback is faithfully reflected the views of its audience: the Radio 4 audience. That's a well-heeled, largely metropolitan audience even more removed from the general popular mood than most politicians at Westminster!".

That line of defence (dreamed up my me) may have some truth in it (if I say so myself), but how does it explain this bizarre section from presenter Roger Bolton (beginning at 7.47)?

I should, by the way, point out at this time also we have had some people - Stephen Luscombe and Elaine Langham, for example - saying just that they thought the BBC coverage was (now adopting a slightly incredulous tone of voice) biased towards the Remain campaign. I suppose that's an example of Feedback trying to be balanced.

That 'attempt at balance' took all of 13 seconds. Why didn't we hear what Stephen and Elaine actually said? Were the pro-Remain listeners who did appear really representative of the feedback received by Feedback?

Was "I suppose that's an example of Feedback trying to be balanced" simply a two-fingered salute from Roger Bolton to 'people like us'?
Posted by Craig at 13:06