I just saw a tweet from the BBC News Press Team that said: 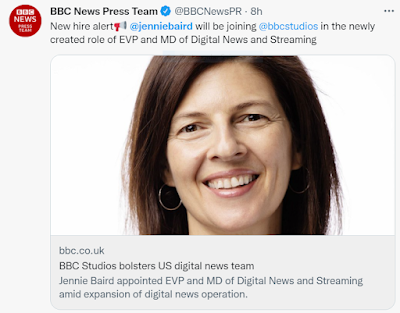 I also saw this from the lady herself:

As you do when you see such things if you blog about the BBC, I clicked around and read the BBC Media Centre press release about Jennie Baird's appointment. It quotes Rebecca Glashow, President of BBC Studios Americas, saying “Jennie is a digital heavyweight in the constantly evolving news media landscape, her appointment reflects our ambitions to further reinforce our global news team and double down on our commitment to providing a world-leading digital offering” and plugs how “trusted” the BBC is and how it has “no point of view”.
Another thing you do as a blogger about the BBC these days is to check the BBC recruit's Twitter feed, like an archaeologist, to check if they have “no point of view”.
Jennie Baird's Twitter feed is quite interesting in that respect. I'd say that she has a point of view.
Here she is in the run-up to Donald Trump's election victory in 2016:
And after the election:
And on the events of January 6th 2021:
She apparently votes Democrat, tweeting in 2013:
And seems generally pro-Democrat:
I think she'll fit in nicely at the BBC. I suspect she'll share many a latte with a whisper of cinnamon with Emily Maitlis.
Posted by Craig at 22:05