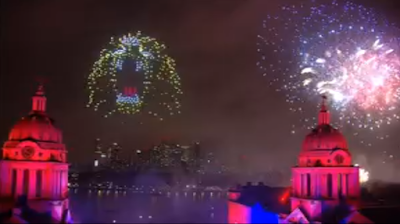 I didn't watch the New Year on TV. I listened to a piece of Vaughan Williams I'd never heard before and read the chapter on Carlisle railway station in Simon Jenkins's Britain's 100 Best Railway Stations. [I certainly know how to party].
Catching up on the BBC One/Sadiq Khan midnight offering just now made me smile. The first bit of doggerel reminded me of McGonagall - long lines in pursuit of a rhyme [new/2022, come/2021, vaccination/nation, seen/18, camaraderie/cardie, heals/free school meals].
The verse asked us to “relish the magnificent things we achieved in 2021” - very BBC/Sadiq Khan things by and large:

We rallied round our NHS heroes as they rolled out the vaccination./ And stood beside our Three Lions, heads raised and proud - united, together, as a nation./ We won 124 Paralympic medals, one of the greatest hauls we've ever seen./ And our star Emma Raducanu won the US Open, and she's only 18!/ We saw the return of live events and reclaimed companionship and camaraderie./ Tom Daley took home gold and still found time to knit a cardie!/ COP26 convened in Glasgow, aspiring to build a world that heals./ And Marcus Rashford and his fans gave out 21 million free school meals!

The commentary continued by looking forward to the England women's football team going one better than the men's this year and in place of last year's controversial BLM black first in the sky contented itself by the voice-over earnestly saying, “The players take the knee united in their stance against racism.”
UnHerd's Mary Harrington captured it all rather brilliantly in a tweet:

2012-style Danny Boyle nationalism is alive and well inside the M25 time capsule.