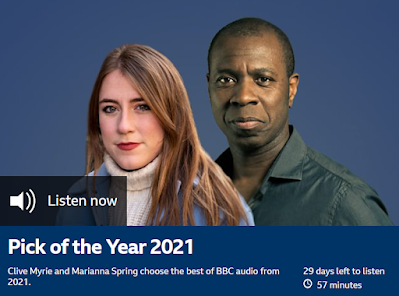 One more post on this year's Pick of the Year with Marianna Spring and Clive Myrie...
As I listed earlier, the first part of the programme rehearsed the usual subjects covered by the BBC's Disinformation Unit, with social media getting it in the neck over misinformation as usual.
However, here comes another preachy passage from later in the programme when they discussed the 24 November migrant tragedy in the English Channel when 27 people drowned.
They'd already played a clip of a Thought for the Day by Bishop Nick Baines where Bishop Nick had said, “The difference between the fallen Westerners in Afghanistan and the drowned Easterners at Calais is that we label the latter, question their choices and forget their identity”, and Clive had said “the feelings were summed up” by this TFTD, without outlining quite whose feelings were “summed up”. [I'm assuming he thought he and Marianna were speaking for everyone], when this was said:

Marianna Spring - It always strikes me whenever I see these stories in the news just how bad it must be for you to leave where you call home. Because why would you ever choose to. It's the place where everyone you love usually. It's the place you know. It's the place you so desperately want to stay. And in that terrible tragedy where so many people were killed off the coast of the UK a large number of them were from Afghanistan. And we've all seen what's happened there over the past 6 months, especially, and the Taliban takeover and what that means for lots and lots of the people who live there, who are fearing for their lives.

Marianna Spring describes herself as an “award-winning specialist reporter covering disinformation and social media” with BBC News and BBC Trending, but she was peddling a bit of disinformation of her own there.

It's simply untrue that a “large number” of people killed in that terrible tragedy “were from Afghanistan”. Most were Kurds.

Maybe she should fact-check herself?