Your Views on GB News 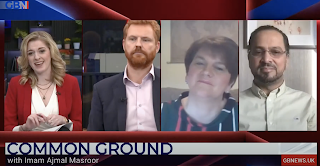 I know GBNews is a breath of fresh air. Big sigh. Tell me what antidote to the currently biased MSM wouldn’t be?

I’m aware that Andrew Neil was so disgruntled with what he described as ‘UK’s Fox News’ that he got on his hobby horse and rode off in all directions - for example to Channel 4., and apparently also back to the Beeb.

However, nothing and no one is ever perfect, and as an alternative to the BBC, GBNews isn’t completely doing it for me. I still enjoy watching much of it, but regret that it has to be in a ‘best of a bad job’ kind of way. 'Least worst'.

(I wonder what happened to Frank Bruno. Oops! I fear he’s been sectioned. )

Despite Tim Davie’s promised top-down overhaul, if that was indeed the promise - I can’t quite remember - recent staff appointments in the news department indicate that things are heading in the opposite direction. I think the BBC is actually doubling down.

I ought to explain my disappointment with GB News. Firstly, I do agree that it has settled down considerably since the shaky debut. Sound and lighting problems sorted, new presenters hired, and people of substance gradually agreeing to appear, cautiously sensing that being seen on GB News doesn’t automatically nix their credibility.

My main disappointment is that several of the ‘personalities’ are being allowed, nay, encouraged, to opine willy nilly on subjects other than their niche specialisms.

Take Nigel Farage. He with the smokers’ cough and overbearing manner. He was someone to be reckoned with on your Brexit. Indeed, he is Mr. Brexit. He was and is persistent on your illegal immigration and wouldn’t let it lie. He is undoubtedly super-qualified to opine on these topics, but expertise in certain areas doesn’t automatically confer expertise on everything else under the sun upon one.

My disappointment is that I think he is unduly strident and overbearing on various other topics yet silent on others. Mark Steyn is another case in point. (Or case in disappoint) He used to be someone to be reckoned with too. Very much so. Now I’m not quite sure. However, it’s unwise to project your hopes and dreams prematurely onto any individual; maybe best to wait till they’re long dead?

It seems that GB News is, in general,  pretty restrained on Islam. Only Patrick Christys so far has spoken up on behalf of Israel and British Jews.

I watched a shocking example  (scroll to 1:35: 54) of ignorance by the host, Conservative MP Dehenna Davison this morning, during a feature ironically titled “Common Ground”. It might be common ground for some people, but  - let's just say it’s debatable. Watch as Davison fawns over guest Imam Ajmal Masroor  (of The Big Questions notoriety) as he tells a sentimental tale about a generous donation of books to the people of Gaza while spouting some rabidly antisemitic, wildly perverted, and untrue ravings against Israel.

Maybe it’s too late. The demographics ensure that robust criticism of that ideology is out of bounds.

So, is there hope for GBNews? Your views?