That BBC article that so got my goat last night - BBC seeks swift response to bus anti-Semitism story complaints - remains unchanged. David Collier isn't impressed with it either and makes a further point:

This is part of the problem. Look at the article. A typical BBC report. Not a single name attached to it. The identities are all hidden - no byline, just an unnamed 'spokeswoman'... an anonymous article with no accountability. Faceless - nameless- shameless. That's the BBC. 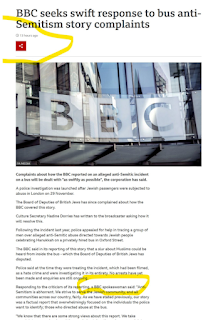