My ancestral stamping ground of Carlisle featured in the first report of last night's BBC One News at Ten.
It's a fascinating place to visit with some wonderful historic buildings, ranging from The Citadel, built in 1541 by Henry VIII and standing at the southern entrance to the city centre right next to the glorious early Victorian railway station, up to the Norman castle resting on the northern outskirts of the city and built some 450 years earlier by William Rufus.
Here's an aerial view of it: 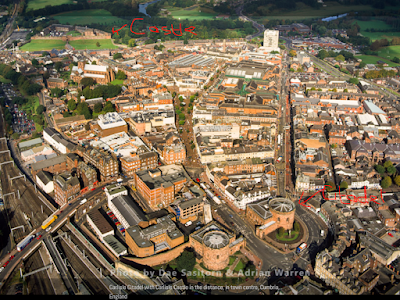 So I spotted a mistake during that report on last night's BBC One news bulletin:

Huw Edwards: No new restrictions have been introduced in England for New Year's Eve, but in Scotland, Wales and Northern Ireland there are stricter rules in place for hospitality venues and indoor gatherings. People in Scotland and Wales have travelled to England to celebrate the New Year, while Boris Johnson has urged anyone attending parties to take a Covid test beforehand. Our correspondent Olivia Richwald reports now from Carlisle in Cumbria which is just eight miles from the the border with Scotland.
Olivia Richwald: New Year's Eve in the border city. Carlisle Castle was once used to keep the Scots out. Now it welcomes them as they arrive in the centre. And earlier today many Scots made the trip south.

The accompanying image was of the Citadel, not the Castle: 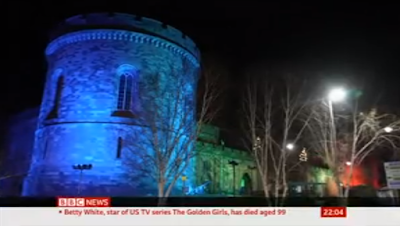 So, yes, Olivia - despite the potted history lesson she laid on for BBC viewers - got the Citadel, which greets visiting Scots (and others), mixed up with Carlisle Castle, which doesn't.

Talking of potted histories, if you're into quizzes you might want to remember this: Carlisle Castle was the last English fortress to undergo a siege. It happened during the Jacobite Rising of 1745–6.