Well, it’s Holocaust Memorial Day again.  What is that? Let the  BBC explain it to you:

Today is Holocaust Memorial Day - an event that happens every year to remember the millions of Jewish and non-Jewish people who were killed by a group called the Nazis, during World War Two. Find out more with our guide.

I’m probably being hypersensitive, but my antennae twitch when I hear the qualifier “all forms of” attached to alleged racism. (note ‘alleged’ and note the hedging-your-bets phrasing: “millions of Jewish and non-Jewish people”.)

Does that imply ‘millions of Jews as well as millions of non-Jews?’ Why is it always “antisemitism-and-all-forms-of-racism” but never “Islamophobia-and-all-forms-of etc? I mean, is Islamophobia so abhorrent that it doesn’t require the oblique implication that  “your grievance is nothing special.”

The Bus Rolls On.

Video has emerged of a group of men spitting at a bus full of Jewish teenagers in Oxford Street where the group were celebrating the first night of Chanukah.

Video has emerged of a group of men spitting at a bus full of Jewish teenagers in Oxford Street where the group were celebrating the first night of Chanukah. pic.twitter.com/orOrA9kJEu

The saga of Oxford Street bus-gate rumbles on. The BBC has been investigating itself again and finding itself innocent. Not exactly innocent your honour, but not completely guilty either; only ‘partly’. Just a bit. A little bit antisemitic, you know, for balance.

Which do you want - the short-form or the long-form version of their findings?

Anyway, the BBC has added an / some (must be especially careful with our singulars and plurals) updates and amendments to the report.

“……….Since publication of that amendment, the claim a slur could be heard has been disputed by Hebrew speakers and others. In response to criticism of the reporting the director general of the BBC instructed the Executive Complaints Unit (ECU), which is editorially independent from BBC News, to investigate a number of issues relating to the original reporting of the incident and the subsequent dispute over whether a slur could be heard.”

and they’ve kindly inserted a link to the ECU (Executive Complaints Unit) ruling, see above.

Melanie Phillips goes into more detail. This is never-ending saga is an example of the Beeb digging itself deeper into its sorry little hole, but the Jewish press isn’t about to let it go without a robust counter-attack.

"It is a travesty that the BBC thinks that it can toss the Jewish community a bone by upholding minor elements of our complaint while defending almost the entirety of its reportage and conduct over the course of this abominable saga. Sadly, this sort of stonewalling is exactly what British Jews have come to expect from our public broadcaster.

All I will ask is - what’s the difference, if any,  between the two antis? Namely anti-Muslimness and the dreaded Islamophobia? I don’t know, but maybe ‘Muslimness’ implies an unacceptable degree of religiosity (behaviour that manifests (negatively) as adherence to certain Islamic “dos and don’ts” within the religion) such as homophobia, antisemitism, misogyny and assorted illiberal attitudes and prejudices that affect one’s objectivity.

The lady at the centre of the controversy, Nusrat Ghani MP, doesn’t seem to have been embracing the more negative aspects of the aforementioned non-objective definition, so the whole thing seems somewhat ‘conjoured-up’ to me, coupled with the fact that this kerfuffle and partygate itself, is old news. 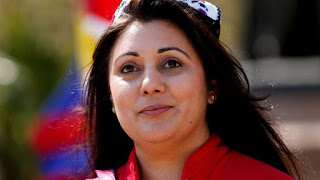 As it’s Holocaust Memorial Day I’m including something about the rise of antisemitism in general - perhaps not directly, but certainly fundamentally related to the BBC

This article appeared in a fashion mag of all things. One I’d never heard of. Glamour Magazine. It somehow makes me think of Elton John in massive platform shoes.

Horrible as this was, most of the antisemitism I have encountered on campus hasn’t been from my fellow students but from my teachers.

Yep. The antisemitism present and rising in our universities is appalling. The primarily left-wing march through the institutions. What price ‘never again’.

One of the most obnoxious, university-based perpetrators of this is an ITBB  favourite, Ghada Karmi.

She is an academic, and her upside-down version of history is currently popular throughout anglosphere academia. Another thing - even our favourite TV personalities like Robert Rinder are noticing it.

Last week, I was talking to a friend whose sons happen to love falafel. She was telling me how her boys recently went to their favourite restaurant in Golders Green to eat a load of them. As they sat outside munching, they spotted a car slow down in the road. Suddenly, the driver unfurled a Palestinian flag, screamed “dirty Jews!” and drove off.

That abusive ejaculation, which sounds familiar, illustrates my contention that the BBC’s Oxford Street mis-perceived ‘slur’ -  namely that the enhanced audio contained the unlikely phrase “Dirty Muslims” - is a typical example of projection. It also substantiates the proposal that BBC staff may have misheard the phrase as a result of the “Apollonian tendency” [described as] the mind’s inclination to create order or meaningfulness, especially when encountering unfamiliar information.