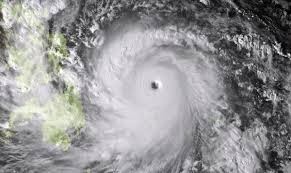 I'm confused, and this might possibly be one of the stupidest posts ever posted on the internet (which is saying something), but...

What's going on here? Which figures are correct? And what's with that '235'? Just a coincidence?

That fount of impeccably accurate information (\sarc - for those who need that sign!) Wikipedia tells us:

With an expanding and deepening central dense overcast and clear eye visible on satellite, the Joint Typhoon Warning Center (JTWC) upgraded Haiyan to a super typhoon—a typhoon in which maximum sustained winds attain or exceed 240 km/h (150 mph)—early on November 6. After entering PAGASA's region of responsibility, the JTWC upgraded Haiyan to a Category 5 equivalent on the Saffir-Simpson hurricane wind scale. Steered by a subtropical ridge to the cyclone's north, the eye of Haiyan passed over the northern portion of Palau, where extensive wind damage was observed. Thereafter, it continued to intensify; at 1200 UTC on November 7, the Japan Meteorological Agency (JMA) upgraded the storm's maximum ten-minute sustained winds to 235 km/h (145 mph), the highest in relation to the cyclone. At 1800 UTC, the JTWC estimated the system's one-minute sustained winds to 315 km/h (195 mph), unofficially making Haiyan the fourth most intense tropical cyclone ever observed. Several hours later, the eye of the cyclone made its first landfall in the Philippines at Guiuan, Eastern Samar, without any change in intensity; if verified, this would make Haiyan the strongest tropical cyclone to make a landfall on record, which may surpass the old record of 305 km/h (190 mph) set by Hurricane Camille in 1969. On November 8, the cyclone entered the South China Sea and was downgraded to a Category 4 typhoon by the JTWC. Readings indicated that Typhoon Haiyan dropped to Category 3 as it traversed the South China Sea, with gusts of up to 210 km/h (130 mph) and 1-minute sustained winds of up to 190 km/h (120 mph).

So, is the top speed Haiyan reached 170-195 mph, or is it 235 mph? And why can't the world's most prestigious media organisations agree?

Surely they can't be confusing metric with imperial measures, can they? How bad would they look if they fell for that most basic of errors? Or are they reporting someone else's confusion over imperial and metric, and failing to confirm it independently?

Having done all this Googling around, I find I've not got a scoop here after all.

Thankfully, to compensate for that, I find that my doubts about posting this piece may have been misplaced. Others have been thinking the same thoughts.

Further Googling reveals, for example, that Anthony Watts's 'climate sceptic' blog Watts Up With That has been tracking the apparent confusion reigning across the world's media for the last day or so in some detail, and they are coming to the confusion that the world's media really is stupid enough to have confused imperial and metric measures - which, if true, is a pretty damning indictment of the levels of accuracy, numeracy and credulity within the mainstream media, isn't it?

The picture is still confusing, but the confusion seems much more general now.

Donations to the victims of the disaster incidentally can be made here, via the Red Cross:


UPDATE: The blogosphere is a wonderfully collaborative venture (at times), so I'm pleased that Alan at Biased BBC has borrowed the gist of this post to create one of his own.

In an inverse, parallel-universe sort of way, I almost owe him a hat-tip. [Now, where's that \sarc symbol again?]
Posted by Craig at 13:59