Does ‘sharing a platform with’ automatically bind one to the other speakers at, say, an event alongside Muslim hate preachers ?
If so, that would besmirch one helluva lot of the great and good in this country.

As a fan of Harry’s Place, particularly when the debate  reaches levels that no other blogs can reach, I couldn’t help noticing the name of the BBC Commissioning Editor for Religion and Head of Multicultural Programming, Aqil Ahmed, when it cropped up in the comments section of this gripping thread.

The article concerns MP Andrew Slaughter’s litigious reaction to being criticised on Harry’s Place for being listed as a speaker at this year’s GPU conference.  That is an acronym for an outfit entitled Global Peace and Unity, with the sub-heading "Freedom for all". Abandon traditional interpretations of Peace, Unity and Freedom, and visualise a “Peace and Blessings  Be Upon Him” kinda peace, unity and freedom, and you’ll get the picture.

I understand that this organisation has been holding annual conferences since 2005, and Andrew Slaughter MP has been engaged as speaker on a number of previous occasions, but perhaps since the climate has slightly hardened against extremist Islamists and Muslims with links to terrorist organisations, something in the air has made Mr. Slaughter feel that an article accusing him of doing so once again in 2013 is “scurrilous, highly offensive and defamatory”.

The author of the article in question kindly withdrew it from Harry’s Place, and instead wrote a piece explaining why.

“Mr Slaughter has told me that he is taking legal advice for my “false and malicious statements” about him being a speaker at GPU 2013”.

Mehrdad Amanpour poses a very reasonable question, namely whether 'blogging' something that had been announced loudly and clearly by the organisers of the conference could be termed malicious; and surely, if anyone has made a slanderous error, surely it should be the GPU organisers whom Slaughter might best accuse, nay, sue for doing this scurrilous, defamatory and highly offensive deed, should it not?

Anyway, the good news is that Slaughter is not speaking this year, but the bad news is that after much deleting and rejigging of websites and conference schedules, it seems that the BBC’s Aqil Ahmed is involved. He’s not listed as a scheduled speaker as far as I can tell, but his mugshot is still there as are the mugshots of one or two other “experts” on the Middle East. 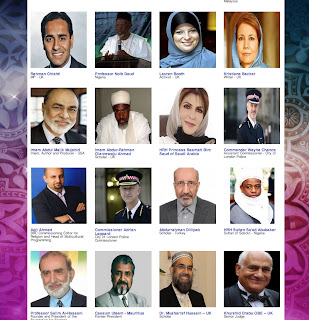 Though this might seem speculative and gossipy, it does seem worth flagging up.

“Sadiq Khan MP, Lord Falconer and Simon Hughes MP who were also named in various media all managed to have their profiles removed promptly from the GPU 2013 publicity.”

If certain persons in public life are taking great pains to dissociate themselves from a group because of its alleged links to extremism and advocates of terrorism, and if the BBC’s Commissioning Editor for Religion and Head of Multicultural Programming is not, surely we should at least be told.
Posted by sue at 14:58