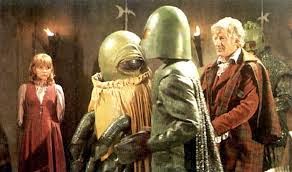 Here's another post adding to the hype about tonight's Doctor Who whilst simultaneously moaning about it...

My family were gathered around the TV last night, discussing BBC One's News at Six.

Important points were being made about how all those fat cats who run places like the Co-op Bank (and their lawyers) all seem to have fat faces, and serious questions were also being asked about why some BBC reporter or other was needlessly standing in front of a village church that you couldn't actually see because it was night time. (He had to tell us he was standing in front of the village church, and pointed to a sign to prove it).

At about 22 minutes into the news though, came a piece on the anniversary of Doctor Who, with the BBC's arts guy Will Gompertz reporting from inside the TARDIS.

It felt as if it has gone on for at least five minutes.

But had it? Surely, with so much real news going on, the BBC's widely-viewed main evening news bulletin couldn't really have given over so much time to a shameless, completely-uncritical plug for tonight's anniversary episode? Surely my sense of time must have been deceiving me?

Well, the BBC News website has this very report, and it goes on for 5 minutes and 15 seconds - and that's without Fiona Bruce's introduction.

And they say the BBC doesn't advertise! (That would make a nice catchphrase).
Posted by Craig at 13:07