No lights on 'Sunday' 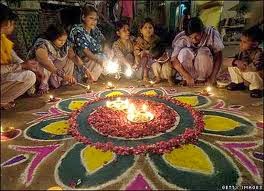 "When looking for bias, one invariably finds it", says one of the BBC's defenders at the Guardian website (in the thread beneath the report mentioned in the last post).

It's a theme I used to dwell on quite a bit here, and it's one that those who blog about BBC bias should always have at the back of their minds, acting like a smoke detector.

As someone who tunes into Radio 4's Sunday with the express purpose of monitoring it for bias, I am certainly "looking for bias". Almost "invariably" I "find it" too.

For example, as many of Britain's Hindus and Sikhs are celebrating Diwali today, you might have expected Radio 4's main religious current affairs programme to feature something to reflect that - as, for example, they often do whenever it's a major Muslim festival.

However, if you may recall, Sunday has a proven track record of ignoring Hindu and Sikh concerns - as per my earlier survey of this very issue which resulted in the following stats:

Therefore, I didn't expect that Sunday would pay any attention to Diwali today, just as it ignored the festival in 2012 and in 2011 as well.

I was "looking for bias" today over this issue and, as there was no such feature today, "found it."

As Hindus and Sikhs together comprise around 2.3% of the UK population, as compared to 5% for Islam, you might have expected - from the pro-multiculturalism BBC especially - a better balance of coverage.

Why does Sunday largely ignore Hindus and Sikhs, whilst paying so much attention to Muslims? Is it because the BBC has a pro-Muslim bias? Or because Muslims complain a lot more than Hindus and Sikhs? Or because Muslims are always getting themselves into the news these days, for one reason or another, and Sunday, being a religious current affairs programme, is bound to reflect that fact?

Even if the last point is the main reason, that still doesn't fully explain the sheer scale of the discrepancy between the coverage of the three religions on Sunday.
Posted by Craig at 11:22