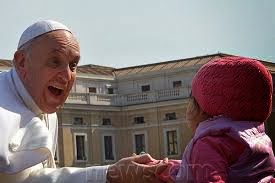 An article in The Sunday Times talks about the "electrifying" effect Pope Francis is having on British Catholics. There's even been a 20% increase in church attendance in Britain since he became pope just eight months ago.

Having listened to every edition of Radio 4's Sunday for the last three years, I can certainly confirm the existence of the 'Francis Effect'.

In the days of Pope Benedict, programme after programme, would dwell on negative stories about the Catholic Church [extensive proof of which can be found here], and whenever Benedict's name came up there was bound to be some linguistic equivalent of a curl of the lip from either Edward Stourton, David Willey, or whoever they had on from The Tablet (usually Robert Mickens). Pope Benedict's conservatism (as they saw it) wasn't to their liberal Catholic tastes at all, and they didn't try very hard to disguise that fact.

Pope Francis, however, has received a very good press from Sunday. Guest after guest, over the months, has said nice things about him. The audible curl of the lip from Ed and David has vanished. The negative stories about the Catholic Church are less frequent than they used to be. There are more positive stories as well.

It's clearly the 'Francis Effect' in action.

This morning's edition closed with a discussion about Pope Francis. The prompt was an enthusiastic piece written about him in the Guardian by Jonathan Freedland. Jonathan admires Francis for advancing (as he sees it) progressive messages which are music to the ears of secular left-wingers such as himself (and, by the sounds of it, Ed Stourton), especially his anti-capitalist pronouncements.

Interestingly, we did hear a negative take on Pope Francis as well. Not from a traditionalist, conservative Catholic type, naturally, but from another secular left-winger, Terry Sanderson of the National Secular Society.

Terry gave a huge 'Bah humbug!' to the Pope and to Jonathan Freedland's pro-Francis fervour - though he slightly softened as the interview went on, presumably as a result of the overwhelming tidal wave of progressive optimism coming at him from the other chairs in the Sunday studio!

[In the interests of frankness, I should add that I have a bit of a soft spot for Benedict XVI and for Francis, even though I'm no Catholic].
Posted by Craig at 11:57