What Lonely Planet is the BBC on?

Being Sunday, there's just got to be a juicy BBC-related piece in the Sunday Telegraph. And so there proves to be.

The paper features an Andrew Gilligan piece called What Lonely Planet is the BBC on?.

This outlines the findings of the BBC's own investigation into its extravagantly costly purchase of the travel guide Lonely Planet - a "scandal" that resulted in a £100 million loss to the corporation (and, thus, to licence fee payers).

Intriguingly, Andrew Gilligan observes that this BBC report, published last week, went "almost unnoticed by the media". His piece was, indeed, the first I'd heard of it.

This £100 million loss can be added to the "digital media initiative" fiasco, which wasted £98 million:

Those two mistakes alone cost as much as the entire annual editorial budgets of five national newspapers put together.

Mr Gilligan also makes some interesting points about how far the BBC's reputation is beginning to fall, even among those who aren't the corporation's traditional critics (on the Right), and points out something particularly revealing in the process:

At Bafta, the largest news organisation on the planet hasn’t won a single award for news coverage since 2006, and has only won it twice in the 12 years since the award was created. 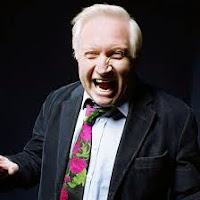 The power of the BBC is also questioned by David Dimbleby, no less, in an interview with Oliver Thring in the Sunday Times.

He changes the subject: “We’re coming up to the new BBC charter — that’s the big issue.” What does he think about it? “I’ll tell you.” He believes there is “an argument for funding some things that are outside the BBC so it doesn’t have this all-powerful position. I’m not sure democracy is served by having an organisation so huge and powerful.”

Public broadcasting should have “slightly more centres of power”, although “I don’t take the Murdoch or Thatcher view that the BBC should be broken up”. Does he mean the corporation is too big or risks being seen that way? “I’ve said what I’ve said,” he snaps, glaring at me.

David Dimbleby, however, despite his protestations to the contrary, remains a BBC insider to his finger tips (despite his 'independent' status) and, thus, seems rather aloof from the concerns of us lowly BBC licence fee payers:

I ask whether it was right that the former director-general George Entwistle, who resigned last November over the Lord McAlpine scandal, should have received more than £800,000 for 55 days’ work. “I think the jury has reached its verdict on all that. I wouldn’t want to add to the pain of that.” Whose pain? “The pain it’s caused the BBC.”

I say some people might think it strange that his instinctive reaction is to worry about the hurt feelings of people within the BBC. What about ordinary people who see their licence fee money spent on this and other huge pay-offs? “I should think they were horrified too.”

Should those on the minimum wage subsidise the salaries of millionaire presenters? “I don’t know — I’m not a millionaire presenter.” Dimbleby sold his family newspaper business for a reported £12m in 2001. His current contract for presenting 30 episodes of Question Time is thought to be worth £2.3m.

That last sentence calls for an "Ouch!"
Posted by Craig at 11:15