Yeah, but what about Andrew Neil, Nick Robinson and Jeremy Clarkson? 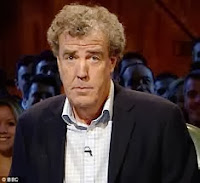 It's Sunday, so there must be an article attacking the BBC in the Sunday Telegraph. And so there is - though the paper's website isn't making too much of it.

It's by former BBC reporter and ex-MP Sir Martin Bell.

Sir Martin believes it's the BBC's wastefulness with public money that's at the root of the problem -most damagingly demonstrated by those excessive payouts to top executives, but also revealed (he says) by such things as the corporation's heavy spending on expensive buildings.

His answer? A dose of mild austerity at the BBC.

That's it really. No wonder the Telegraph isn't splashing with it.

Still, the piece discusses the alleged problem of bias.

Ignoring all the past/current admissions of a pronounced left-wing/liberal bias by senior BBC figures, Sir Martin essays what we might call "the oldest trick in the book", as it's a gambit which almost inevitably seems to get deployed by (left-leaning) BBC defenders whenever there's a BBC-critical article somewhere relating to Left/Right-style politics.

The gambit may be summed up as: "You complain about left-wing bias at the BBC. Yeah, but what about Andrew Neil, Nick Robinson and Jeremy Clarkson? Therefore, you're wrong. QED"

So, say, if at any time over the past few years who may have noticed that many reporters at Newsnight (excepting Mark Urban and the non-voting Jeremy Paxman, maybe) appear to lean leftwards - whether that be Michael Crick, Peter Marshall, Paul Mason or the current crop of ex-Guardian people, Allegra Stratton and Ian Katz - someone would then amble along and say, "Yeah, but what about Andrew Neil, Nick Robinson and Jeremy Clarkson?"

The almost-guaranteed mention of Jeremy Clarkson [which, wisely, Martin Bell doesn't indulge in] always makes me smile, given that he's not part of the BBC's news wing. He's an entertainer-with-views - and his right-wing leanings can immediately be countered by the mention of about twenty to thirty openly left-wing Radio 4 comedians.

Anyhow, here's how Sir Martin deploys the "Yeah, but what about Andrew Neil, Nick Robinson and Jeremy Clarkson?" gambit:

Not all the present commotions are well-grounded. I don’t accept the widely made charge that the BBC is institutionally Left wing. Its two leading daily political analysts are manifestly not of that colour. I know Andrew Neil both personally and professionally: he does not have a socialist bone in his body, not so much as a little finger. Nick Robinson was once National Chairman of the Young Conservatives. His supposed ad-libs are politically balanced to the point of banality: and so fine-tuned in advance that he always thinks of two things to say, just in case he forgets one of them.

His other evidence that the BBC isn't left-biased is (a) that Jeremy Paxman admitted he didn't vote in one election [which, to my mind, proves nothing much] and (b) that Justin Webb seemed sympathetic to George W. Bush when he was the BBC's Washington correspondent [which could be countered by bringing up Justin's predecessor in Washington, Matt Frei, who seemed sneeringly unsympathetic to George W. Bush, and Justin's successor in Washington, Mark Mardell, who seems almost sycophantic in his reporting of Barack Obama.]

And that's it really. Sir Martin Bell's answer to "the widely made charge that the BBC is institutionally Left wing", is "Yeah, but what about Andrew Neil, Nick Robinson, Jeremy Paxman and Justin Webb?"