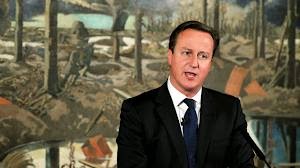 Alan at Biased BBC has written an interesting dissection of Jeremy Paxman's forthright criticism of David Cameron over the prime minister's plans to commemorate Britain's involvement in the First World War.

Paxo's criticism has appeared in print, and - to a wider public - on the Graham Norton show.

Alan argues - with supporting evidence - that Paxo got it dead wrong, mistakenly thinking that the PM was preparing a 'knees-up' akin to the Queen's Diamond Jubilee.

Prompted by that misreading of Mr Cameron's words, the newly-bearded Newsnight presenter mounted a high horse and ranted to the world - as if he were an internet blogger - that the PM wants to 'celebrate' WWI, which is something only an "idiot" would do, describing him as a "posturing politician".

A check-back at the less-than-entirely-sympathetic Guardian's reporting of the PM's original speech makes it clear that Alan is right, and Jeremy Paxman did indeed get it completely wrong. The PM didn't call for a celebration. Far from it.

Reading Alan's piece, thoughts crossed my mind of 'Plebgate' and the calls for the police officers involved to apologise to Andrew Mitchell. It seems that Paxo owes Dave an apology.

I like Jeremy Paxman, but opinionated, impartial BBC presenters need to check their facts before rushing onto the BBC's bully pulpit, and yelling through a licence-fee-funded megaphone - or risk looking biased and incompetent.
Posted by Craig at 18:16