Have you been following this story?


The Simon Wiesenthal Center wrote to the head of the WMA with concern that such an initiative filled with lies could occur.


Although the response from the head of the WMA was written diplomatically, the tone seems to indicate that he considers the BDSers to be irritating jerks. ” 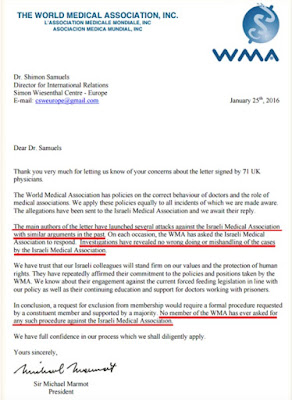 There was considerable speculation as to the identities of the 71.

No-one seemed to know, but since they claimed Israeli doctors “perform medical torture” on the Palestinian patients (at least they acknowledged that Israel treats sick Palestinians) it would be fair to assume there would be a good number of, let’s call them ‘Jeremy Corbyn’s friends’ amongst the signatories.

Now all is revealed. Elder has updated his post, revealing the 71 names.

There appears to be a number of psychiatrists in there, as well as Jenny Tonge and my favorite anti-Israel fanatic from a university ‘near you’ (me)  Ghada Karmi.  There are also a number of Middle Eastern-sounding names.

Psychiatrists are quite often seriously bonkers (believe me) so you might want to be gentle with them, and of course the Arab ladies and gents will have had their brains reconfigured in childhood, or, what’s the other expression - they’ll have imbibed antisemitism with their mother’s milk - so you have to make allowances for them too. Ghada Karmi and Jenny Tonge - well, they are simply Ghada Karmi and Jenny Tonge.

However, one name stood out. Mr David Halpin. He used to fire off anti-Israel diatribes to the Western Morning News on a fairly regular basis. It’s a regional daily, with a reputation for quality. Not sure why. We used to buy it at one time just to aggravate ourselves, you know, like watching Question Time.

In fact Halpin aggravated me so much in 2009  that I was especially gratified to see him featured on Harry’s Place (circa July 13th 2009) at a time when the aggravation had reached peak. Peak aggravation, it was.
Apparently Israel-hating Halpin had a theory that Dr David Kelly was assassinated, and the BBC  gave him (and his cronies whom they described as ‘campaigning doctors’) the oxygen of publicity for his hypothesis - that previous examinations into Dr Kelly’s death were ‘flawed’.

"Due process has been subverted," Mr Halpin said. "The group that I am part of is not prepared to let that go. There is evidence of a cover-up."

Halpin was backed by Lib. Dem. Norman Baker, author of “The Strange Death of David Kelly”, a book beloved by conspiracy theorists (but less popular with Dr. Kelly’s family)

Here’s the full text of Lucy Lips’s piece, as I know (if you’re anything like me) most of you can’t be arsed to click on every single link.


The BBC has a headline on its news ticker that reads:

Doctors call for fresh inquest into death of government scientist Dr David KellyClicking on the link takes you to this story. It turns out that the “Doctors” in question are, principally, a man called David Halpin. The names of the other doctors who agree with Halpin are not given, but I believe he has a couple. There are, needless to say, a larger number of doctors who do not believe that there is any mystery in David Kelly’s death: but who have not made this issue one of their hobbyhorses.

David Halpin is most certainly a doctor. However, he is far better known as a crank of the first order, who passes his time writing loopy letters to the BBC and national newspapers. Here is an example of one such letter of complaint, to the Today Programme:

I have met Ishmail Haniyeh, the PM, in March 2007 with fellow doctors, and other Hamas ministers since. I would judge them to be trustworthy men who are doing what is right for their tormented people, unlike the collaborator Abbas and his friends. Insight into Hamas, and the literal crucifixion of these people…

I think we can all see where Halpin is coming from. Have a look through his website, and you will too.

Halpin has his own loopy theories about David Kelly’s death. They are dealt with well by David Aaronovitch in his book, Voodoo Histories: The Role of the Conspiracy Theory in Shaping Modern History.

The BBC ought to be savvier than this. Halpin has been banging this drum for years. The fact that he has issued a new press release on his kooky theory is no more a news event, than the publication of yet another article “proving” that the Earl of Oxford or Sir Francis Bacon really wrote Shakespeare’s plays.

A much better headline for this article would have been:

That epithet is not only factually accurate: it also has the advantage of conveying to the BBC’s readership, just how seriously this latest piece of agitation by a very disturbed old man ought to be taken.

At least the World medical Association seems aware of the troublemaking nature of this 71 strong..... bunch.
It brings to mind that ubiquitous ‘complaints from both sides’ mantra, and illustrates how 71 nutters and Islamist supporters do not a valid complaint make.