Going back to the question of whether Woman's Hour has ignored the mass assault of women in Cologne and other European cities...

DB has put the question to Jane Garvey via Twitter: 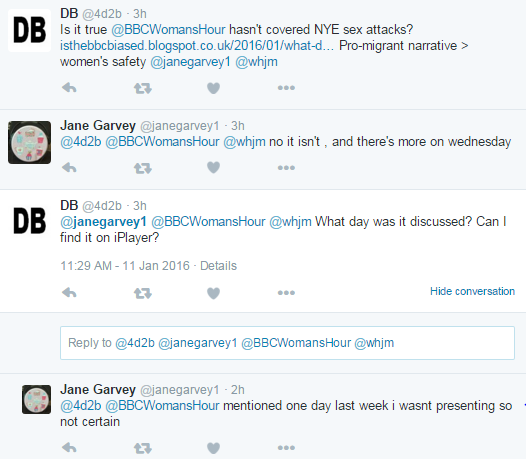 Now, as the Woman's Hour website, which supplies pretty detailed information about each of its segments, didn't include any mention of the subject, DB wondered whether it had been briefly mentioned during another discussion.

So I thought I'd better check.

I've now thoroughly checked all last week's editions of Woman's Hour and, yes, Jane Garvey was correct. It was "mentioned one day last week" during one of the programme's discussions.

...you will hear guest Anne McElvoy mention the attacks in Cologne during the bit on Angela Merkel's 2016.

Anne McElvoy talked about it for precisely 44 seconds.

Jenni Murray then moved the discussion on to another politician.

And that was it!

I think that makes it even worse, don't you? A guest brings it up and the presenter moves it on.

(The phrase 'watertight oversight' springs to mind here.)
Posted by Craig at 22:34