Who's Afraid of the Big, Bad Questions? 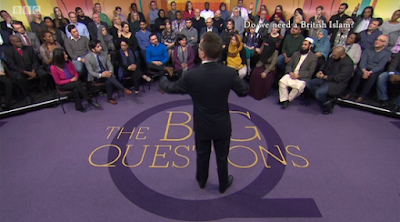 Good grief, what a dispiriting programme The Big Questions was this morning!

Live from a school in Bradford, with what Nicky Campbell promised would be a "lively" audience, an exclusively Muslim front-row panel engaged in "lively" discussion about Islam in Britain - and the 'big question' "Do we need a British Islam?"

Yes, there were no non-Muslims on the front row, and no ex-Muslims either. It was Muslims all the way, thus significantly restricting the debate from the very start.

It was voices of 'moderation' versus voices of 'extremism' from within one faith community, and even the bitterest opponents (and there was a lot of bitterness on display!) agreed on rather more than they should have done.

I bet you can guess what it was like though: plenty of insults flying around, lots and lots (and lots) of angry people loudly talking across each another; lots of partisan clapping; a rude pair of eyes in a burqa playing the drama queen; that hefty chap from the Muslim Public Affairs Committee who's always on this kind of programme being unpleasant to other people; some Muslim Labour MP saying it's nothing to do with Islam; and Nicky, as ever, elegantly pirouetting around the floor like an enthusiastic conductor, enjoying himself.

That said, I don't think Nicky Campbell did a bad job and it was slightly heartening to see some people on the panel's determination to stand up to the bullying of the aggressive MPAC UK types.

And, of course, thanks to the immigration policies of successive governments, we're going to be hearing many, many more such absurdly-heated debates for generations to come, whether we want to or not.

Anyhow, for the record, here's who was invited onto the front row today:

And here's how Nicky Campbell framed the debate:

Islam is the fastest-growing religion in the United Kingdom. The 2011 census found 2.75 million Muslims in the UK and their numbers are growing ten times as fast as the general British population. But there's as much divides as unites British Muslims. Their forebears came from very different parts of the world. Here in Bradford most Muslims originated from Pakistan. In the east end of London Bangladeshis predominate. But some emigrated here from the Caribbean or Arab countries or Africa or the Far East. And then there's the converts - 100,000 of them. Two-thirds of those are women. Now, what unites them all is where they live now: Britain. And some British Muslims are now asking if the time has come to develop a distinctly British version of Islam. So we have gathered together Muslim theologians, academics, social activists, scholars, campaigners and politicians to debate that idea.