One of the mainstay features of the BBC News website (not that, I suspect, many people read it!) is Anthony Zurcher's blog.

Its masthead reads "Welcome to Zurcher's take - where I'll be giving an American view of US politics and culture", but he very rarely writes about US culture. It's pretty much all about US politics with Anthony (though he did also cover Justin Trudeau's election victory in Canada).

The oddest thing of all is that, for months and months now, it's been almost entirely about US Republican Party politics, especially Donald Trump, so much so that I thought Mr Zurcher had been told to focus exclusively on the Republican race and leave the Democratic race to people like Hillary Clinton biographer Kim Ghattas.

Ignoring his latest blogpost, here's a complete list of Anthony Zurcher's pieces for the BBC website going back in time from yesterday till 8 December 2015. I think you'll see what I mean:

That was a mere blip however and, again going backwards in time, came:

You have to go back to October 14 last year to find a small clutch of pieces on the Democratic Party race - "Did the debate dash Biden's presidential hopes?", "A polished Clinton parries Sanders in Democratic debate", "A widening gap between Clinton and Obama" - before it's back to the Republicans again.

I thought I'd point this out because it is symptomatic of the BBC's coverage in general...and because Anthony Zurcher has just posted another piece about the Democratic race - his first in three-and-a-half months!:

Hillary's fight to the finish

The two highest-rated comments (so far) beneath this piece aren't impressed:

7. Posted by fedup
The BBC is so slanted in their coverage it really is disgusting. Finally an article about Hillary and not a mention of the investigation swirling around her. No mention of Top Secret e-mails. Nor is there any mention of the influence peddling that's been uncovered. Donar's cash in exchange for favors, the old Clinton game. Seems like some pretty big questions hanging over old Hillary?

13. Posted by Rather_Be_Cycling
Despite the BBC and the liberal media's best efforts, Hillary Clinton's "damn e-mails" (as Bernie Sanders charmingly describes them) are not going away. Now the BBC might prefer to report instead on every time Donald Trump offends someone's sensibilities. but this Junior Varsity of scandals is not going away. The White House and the Democrats are ready to ditch this mendacious old shrew. 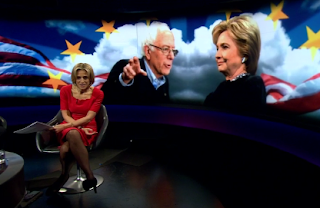 I had to smile at Emily Maitlis's introduction to this feature. It made it sound as if the BBC and the rest of the media have been passive victims of Trump-inspired fate in choosing to massively under-report the Democratic race:

The US presidential race for the past few months has been dominated by the politically implausible, larger than life character of Donald Trump, which means that most of what's happening in the Democratic Race has got quietly lost.

The main focus of the segment was an interview with prominent Hillary supporter, Anne-Marie Slaughter (which was nice for Hillary). Earlier in the month, in contrast, interviews about The Donald were with a Muslim anti-Trump protestor and a New York Times journalist.

There's nine more months to go of all this.
Posted by Craig at 06:07