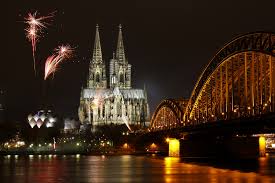 Yesterday the BBC finally got round to reporting the wave of sex attacks on women in Cologne and other German cities by large gangs of "Arab and North African men" which took place on New Year's Eve. They even gave it prominent coverage on their news website. (It was in the top two of their 'most read' articles for much of the rest of the day).

The most-watched news programme in the UK, the BBC's flagship News at Ten, however, made a clear editorial decision last night to downplay the story, pushing it well down its running order and then giving it a mere 19 seconds.

The editorial team behind BBC News at Ten also decided to downplay the sexual element of the attack, playing the words 'robbed' and 'threatened' before 'sexually assaulted' in their description of the event and excising all mention of the fact that at least one of the women was raped.

They also chose to completely censor the clearly highly relevant fact that the gangs behind this extraordinary assaults on the women of Germany consisted hundreds of "Arab and North African men".

This is how BBC News at Ten reported the story last night, word for word:

In Germany tonight protesters gathered outside the cathedral in Cologne after around 80 women reported being robbed, threatened or sexually assaulted by groups of men on New Year's Eve. People suspect that as many as a thousand young males, many of them drunk, carried out the attacks. Chancellor Merkel has called for the perpetrators to be caught and punished.

How can anyone think that that's adequate reporting?

The editorial decision making behind that decision is deeply disturbing and BBC News at Ten should be ashamed of themselves.
Posted by Craig at 18:51