Talking of unPC, I’m going to be that now. 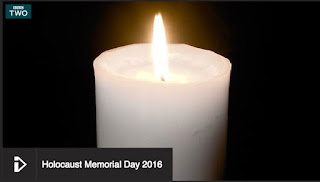 There have been several programmes on the BBC commemorating the Holocaust. We’ve always said here, or at least I have, that in spite of the BBC’s institutional bias against Israel and its aptitude for antisemitic slips of the tongue, they have / it has / always been duly respectful towards the Holocaust.

It’s partly to do with the “misery memoir” phenomenon, a combination of morbid curiosity / placing oneself in imaginary situations of extreme deprivation ...how would I cope? etc... and awe at the enormity of man’s inhumanity.

I’m uneasy that the BBC has turned it into a ‘show’ in the Piers Morgan sense, as in Morgan disrespectfully ascribing the populist term “show” to Question Time, which David Dimbleby considers a ‘programme.’

The somewhat faltering narration (were they sight-reading?) by a couple of well known actors looked under-rehearsed, but that is a minor criticism. In general it was a respectful and moving ceremony.

I don’t feel comfortable with this obligatory inclusivity that has established itself at the BBC.
Why must “Islamophobia” and antisemitism be stuck together all the time. They aren’t two sides of any coin, no matter how much you pretend they are. But to be honest, I would also ask why must Cambodia, Rwanda and Bosnia have to be included in the Holocaust memorial commemorations? Get your own commemorations, I’m tempted to say. It’s taken  nearly 70 years to get ours.
All genocides should be commemorated, no question; but why now? (I'm surprised they haven't included 'the Gaza genocide'.)

Not so long ago the MCB and other Islamic organisations would boycott Holocaust Memorial commemorations. Now that the commemorations are no longer exclusively Jewish they’ve come round. We’re even gifted with Mishal Husain as presenter. Whoopdedoo. I’d sooner do without. Sorry.