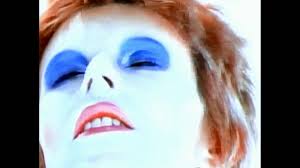 I was driving to work this morning and switched over to Radio 4 at 7.10 to hear Nick Robinson talking about the "shocking news" that was just coming in.

His tone of voice made me gulp. I thought there'd been a sickening terrorist attack or a major assassination but then I caught him saying that David Berry had died and that he was one of the biggest names in modern music, alongside the Beatles and the Stones. I was racking my brains trying to remember who David Berry when it suddenly struck me that David Bowie might much better fit that description and began hoping he hadn't actually said David Bowie. Then he said David Bowie's name again and I realised I'd misheard. "Oh no!", I thought.

That all took place in the space of a few seconds, of course - longer than it look me to write that last paragraph and probably longer than it took you to read it. Still I thought I'd share it with you in the time-honoured spirit of blogging.

Will you always remember where you were when you first read that anecdote of mine?

Everyone was talking about it at work, of course - not for long though as we had work to do, but for a few minutes at least - so I'm not surprised that it's being given a massive amount of coverage by the BBC, Sky, ITV and the papers.

For example, watching the BBC News Channel from 2 o'clock this afternoon, the first 18 minutes were spent on David Bowie before moving onto Syria (after a short advert for what was coming up). Sky News, which I also had on, spent the first 15 minutes of the hour on it before moving straight onto Syria at 2.15 and then onto the latest from Cologne. Both channels were soon back onto David Bowie though, with guests reminiscing, medleys of his songs and further reports. As I'm writing this paragraph the BBC has Paul Gambaccini and Sky has a music industry executive called Jack Steven who has an uncanny look of Bowie (to my eyes): 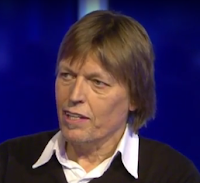 There's a lively debate going on over at Biased BBC this afternoon over whether there's too much coverage, with some saying "enough already" and others saying that Bowie was a cultural icon (even if his music wasn't to their taste) and that it's curmudgeonly to complain about it.

I'm firmly in the latter camp over this - hence this post! (and David Bowie's music was to my taste).

If someone as important to so many people as David Bowie can't be given a single day of heavy news coverage, then the news would be letting a lot of people down.

Anyhow, for those who are more interested in the BBC than Bowie, here's a comparison of BBC One's News at One and ITV's somewhat shorter lunchtime bulletin.

It's always interesting to compare what different news organisations consider worth reporting in the main TV bulletins, to see what they miss and what they include - just as, unlike Sky, the BBC News Channel didn't bring its viewers the latest news from Cologne over the past hour. (Maybe they forgot?):

And now the obligatory David Bowie song - my favourite, in its full-throated, full-length version. RIP.