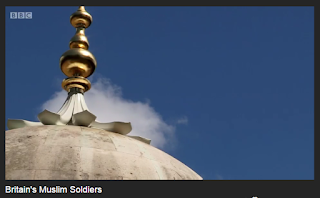 Those watching BBC One this afternoon might have watched a 40-minute documentary called Britain's Muslim Soldiers.

Though it turned out to be an interesting and engaging programme, it had an obvious purpose behind it - a purpose made even clearer by the BBC's own synopsis:

This timely one-off documentary follows the story of the restoration of a forgotten and dilapidated burial ground for 27 Muslim soldiers who gave their lives fighting for Britain in two world wars.

Shot over three years, the film shows the struggle of two understated pioneers - Zafar Iqbal, a Muslim from Woking Borough Council, and Elizabeth Cuttle, a local Surrey history enthusiast - as they battle to get this small plot of land restored and recognised as a symbol of an important and largely unknown part of British history. Using archive material and interviews with historians and surviving descendants, the film also reveals the stories of some of the Muslim soldiers once buried here, and through their experiences the history of the Muslim contribution to the British war effort in World War I unfolds.

The film ends with the voices of modern Muslims who believe this shared narrative is one of the ways that prejudice and distrust of Islam in modern Britain might be overcome. [One of the latter even used the word 'Islamophobia'].

Looking at the credits, the Executive Producer behind this programme - filmed over three years - is none other than Aaqil Ahmed, the BBC's (Muslim) Head of Religion and Ethics, thus showing his personal commitment to getting it onto the BBC's airwaves.

As this is a "one-off documentary", however, it unfortunately doesn't look as if Mr Ahmed will be giving us Britain's Hindu Soldiers or Britain's Sikh Soldiers any time soon.

Two questions linger in my head after watching it.

The first is trivial: Why do so many BBC documentary makers feel they have to use Philip Glass-style minimalist music in documentary after documentary? (It's annoying and distracting once you notice that it keeps on happening - and has been happening for a least a couple of decades now).

The second is much less trivial: Why do so many BBC documentaries have such blatant 'designs' on us? Why must they keep trying to make us see the world the way they want us to see the world? Why does so much of what they do so often emit a strong whiff of propaganda?
Posted by Craig at 15:08