I suppose it’s the time of year when it’s customary to look back over the past year and sum up what you’ve achieved. The good the bad and the embarrassing.

I’m not as methodical at that kind of thing as Craig is, so come on Craig -  if you think you’re clever enough, as that Bradley Walsh chap on ‘The Chaser’ always says.

I did try to look back at something I spotted only yesterday - or was it the day before - on the BBC website -  because I would have liked to mention (and link to) a couple of positive technological “heads ups” featured by the BBC recently, and one human interest story.

But I can’t because of technical difficulties on the BBC’s website. I merely thought I’d draw your attention to them because they happened to be about Israel, and in an unusually positive fashion. They’ll probably give rise to no end of ammunition for those people who complain that the BBC is biased in favour of Israel, which they believe should be permanently no-platformed.

The first one seems to have disappeared from the BBC website, but it briefly topped the sidebar on this very blog - under BBC News;  it was headed “Diet app”.

The story was about a smartphone app that you could point at “food” and it would instantly detect and analyse the bad stuff therein. You know, calories, fats, sugar, gluten, sarin etc. The thing is, this piece of kit was an Israeli product. You’ll have to boycott it of course.

The other techie feature was on the Today programme, in the early morning business section. It was about start-ups. Israel is known as the start-up nation, and this was about a start-up that was all about start-ups. It just surprised me to hear about this in such a positive manner.

The other thing I heard, which surprised me even more was an interview with a young Israeli mother who apparently  became known as “Glocker Mom”  - a play on “soccer mom” if you care -  because she carried a gun (Glock) when she drove her children to and from school.  The interview was played ‘straight’.  I think something’s up with the BBC website, but if you get the “content doesn’t seem to be working” message as I did, you’ll have to take my (unreliable) word for it that (as far as I remember) no attempt was made by the presenter to play devil’s advocate and justify the stabbing, shooting and murder-by-car incidents, as, say Tim Willcox might have done, or to criticise the interviewee’s need to take precautions in such an extreme, contentious and potentially risky manner, or even to dispute that extreme circumstances dictate extreme measures. 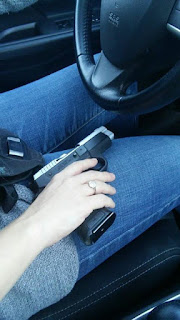 It was just a personal account of one mother’s fear of being attacked, you know, a personal tale, like the tales of Palestinian suffering the BBC brings us on a regular basis. Different though, in that a little context was included this time, unlike the contextless Palestinian grievances we’re used to.

As for our hopes and wishes for this blog, well, it seems more likely that it will have an effect - (what do I mean?) than if we stopped blogging and attempted instead to make and pursue barrages of complaints through the BBC’s impregnable complaints procedure.

In the unlikely event that a complaint from the likes of us should slip through the BBC’s iron dome and be upheld, (in yer dreams) the announcement of the decision to uphold, or partially uphold it, would be buried somewhere dark where no-one would notice it, leaving readers still believing something wrong! What? something wrong on the internet? Whatever next.

Forget the knee-jerk “complaints from both sides” malarkey. Palestinians and their supporters complain at the drop of a hat. They claim that the BBC is biased in favour of Israel. They base that on things like the BBC’s lone, uncharacteristic decision not to air the DEC appeal for Gaza.  Or on the outrage of Mark Regev being given the opportunity to be sneered at by one of the BBC anchors who hates Israel. (Israel should be no-platformed)

So what can you do? On the plus side, Craig has been taken up by The ConWoman. (The website, not ‘A con woman’ - i.e., some of his posts have been cross-posted on their website; they haven’t stolen him.) (Or have they?)

This site has had a lot of hits and page-views, some of which were real, not just those annoying bots that confuse your stats.

When we set out we had hoped for a bit more btl interactivity. Comments and so on. But when you look at the content of some of the other blogs that started off with high hopes, it makes you grateful for the few thoughtful contributions from interested parties ‘out there’.
Quality over quantity every time.

On the whole, it’s been just another year. Onwards and sideways, as Craig would say.