Getting comfortable on the sofa 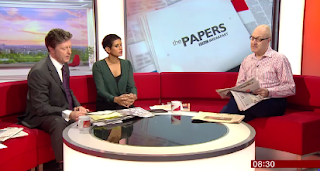 Simon Fanshawe, sporting his usual pink shirt, has been surfing the BBC Breakfast sofa this morning. After a shortish lecture on Google's tax affairs (complete with some of his usual, pro-Labour party political point-scoring), he turned to the migrant crisis:

What is the answer? Is it immigration we're frightened of?

Because on the one level this judge story (in the Mail and the Telegraph) I think is a non-story. He says, "They're economic migrants". Well, they're only coming here to work! You know? "What's wrong with that?", everyone says. "Don;t you want to better yourself?" You know?

Naga 'hmm'ed at that point and the camera showed Charlie nodding his head. Simon continued:


We have a very, very unclear idea about what we want to do about it..about migration.

One thing with watching all of the Saturday and Sunday BBC Breakfast paper reviews so far this year is just how much that makes you notice that not one of the chosen paper reviewers ever says anything 'controversial', as the BBC would see, it on the migrant crisis, or immigration, or Muslim terrorism, etc.

Everyone has nice, 'liberal-lefty' things to say on such subjects - though most are rather wishy-washy (something that can't often be said about Simon Fanshawe, who used the phrase "liberal-lefty" about himself this morning).

The second paper review had a bit where Simon praised another Labour MP and used a "This is not Islam" story to complain about people who "go on" in a "rather accusing way" about how it's up to Muslims to challenge the jihadis. He mentioned that his partner is a Muslim, and he's as "appalled" as anyone about how IS "represent what he feels is his religion".

Simon also steered viewers towards the Health and Safety Executive's website to read their 'Mythbusters Panel' before ending... 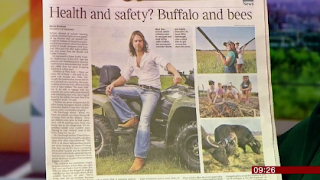 The BBC Breakfast paper reviews are still 'very BBC', aren't they?
Posted by Craig at 10:02