Impressions of an evolving news story 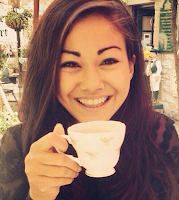 After getting in from work (just after 4 o'clock). I clicked on The Times website (as I usually do, having paid for the privilege) and spotted the paper's second story. My heart sank. A young, female British backpacker had been stabbed to death in Australia by a man shouting "Allahu akbar".

Reading around, it turned out that the young woman in question, Mia Alyliffe-Chung, was from Derbyshire. A 30 year-old-British man had also been stabbed, and a dog killed too. The suspect was said to be French. A bizarre detail in several reports was that he'd been singing the French national anthem before bursting in, shouting "Allahu akbar", and beginning his stabbing rampage. Many reports suggested that the man was infatuated with Mia. Several mainstream outlets named him as Smail Ayad (a man with a Muslim surname).

The BBC News website had the story on its home page, though it was at the bottom of its main headline stories (in 12th position) at the time I saw it. It reported the "Allahu akbar" shout from the start but didn't dwell on possible motivations, briskly saying:

A French suspect, 29, who allegedly said the Arabic phrase "Allahu akbar" during the attack, was arrested.
Police are treating the incident as a murder case, not a terror attack.
They are investigating a number of possible motivations, including drugs misuse, mental health issues and extremism.

It didn't report the suspect's name either (in the public domain from around 3 o'clock in the afternoon, as far as I can see) - nor much else about him.

It seemed to me, given what I'd read elsewhere, to be playing the story down for some reason.

The story was the third item on BBC One's News at Six, however - which could hardly be construed as 'playing it down'. I was reassured.

A 21-year-old British woman has been stabbed to death at a backpacker's hostel in Australia. She's been named as Mia Alyliffe-Chung from Derbyshire. An unnamed 30-year-old British man was severely injured in the attack and is in a critical condition. Ppolice say the suspect, who is 29 and from France, shouted 'Allahu akbar', meaning 'God is greatest', during the attack at Home Hill in Queensland. Sophie Long reports.

That was pretty straightforward, factual reporting (even down to translating "Allahu akbar" correctly).

Strangely, however, Sophie Long's report immediately contradicted it somewhat by reporting the following about that allegedly "unnamed" 30-year-old British man:

That, of course, was just a simple (if eyebrow-raising) editorial cock-up.

Much of Sophie's report, from outside Mia's old school, focused on the attractive, popular personality of the murdered woman. Her friend and a former teacher paid tribute to her.

As to the motivation of the suspect. Sophie Long had just the following to say:

A 29-year-old French national has been arrested. Police say they're investigating an act of individual criminal behaviour that's unrelated to race or religion, despite the comments he made.

She then featured a clip of Steve Gollschewski from Queensland State Police saying:

It is alleged the suspect used the phrase 'Allahu Akbar' during the attack and when arrested by police. Whilst this information will be factored into the investigation we are not ruling out any motivations at this early stage, whether they be political or criminal.

As with the online report, that was very brief and lacking in much of the detail found elsewhere. Plus, again, there was again no mention of the name 'Smail Ayad'.

Feeling confused (after watching that BBC One bulletin), I then Googled around and watched the police press conference in full (on an Australian news site). Queensland's Deputy Police Commissioner Gollschewski made a statement and then took questions.

I felt even more confused afterwards. His statements seemed to me to veer one way and then the other. He talked, for example, of it being "alleged" that "the suspect used the phrase 'Allah Akbar' during the attack and when arrested by police" during his initial statement to the press but then, under press questioning, was emphatic about it being "confirmed" that the suspect did indeed use those words. Police technology caught the suspect doing so (presumably during the arrest rather than during the attack - though DPC Gollschewski didn't make that clear either). Why say "alleged" before going on - under questioning - to say (more than once) that it's actually a "confirmed" fact?

Here are the relevant extracts (with times related to the linked video):

0.22 Steve Gollschewski: The investigation is still in its early stages and more details are expected to become clear as it unfolds. However initial inquiries indicate that comments which may be construed as being of an extremist nature were made by the alleged offender. It is alleged that the suspect used the phrase 'Allah Akbar' during the attack and when arrested by police. Whilst this information will be factored into the investigation we are not ruling out any motivations at this early stage, whether they be political or criminal. Investigators will also consider whether mental health or drug misuse factors are involved in this incident.

3.14 Steve Gollschewski: This is not about race or religion. It is individual criminal behaviour.

4.35 Steve Gollschewski: The motivations for it our unclear. As I said there are many...or a number...of different circumstances that could be at play here and our investigation is trying to determine what they are.

7.04 Steve Gollschewski: We're working very closely with our partner agencies to make sure that if there is any indication that this has an extremist slant to it or this person had been radicalised that we will be able to discover that. At this stage we have no evidence for that.

By now (around 7 o'clock) further news outlets were reporting the suspect's name as 'Smail Ayad'.

Curiously, however, the BBC News website had (at around 7 o'clock) dropped the story entirely from its home page. It wasn't even on its World page. I hunted and found it again on the Australia page, where it was still the lead story. I found that shocking.

Now, checking again (at 20.30), even more curiously, the story has just reappeared on the BBC's home page. In fact it's reappeared as the site's third main story. And it's a brand new report: 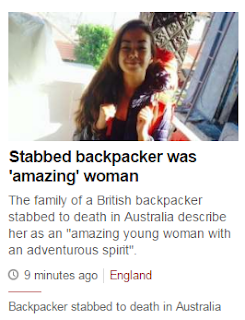 The family of a British backpacker stabbed to death in Australia have paid tribute to an "amazing young woman with an adventurous spirit".
Mia Ayliffe-Chung, from Derbyshire, was attacked at a hostel in Queensland by a man allegedly shouting "Allahu Akbar", Arabic for God is great.
The 21-year-old's family said she was "a rare person who saw beyond race, creed and belief".
They said she would not have wanted to be the reason for "any hostilities".
Police are treating the incident as murder, not a terror attack.

I felt ashamed of myself (rightly or wrongly?) for thinking that the third and fourth paragraphs there were exactly what the BBC would want to report at a time like this - especially when followed by the fifth paragraph.

Scrolling down a bit, this new report then presents another brief take on Deputy Commissioner Gollschewski's statements, choosing to make a particular comment to journalists (in the Q&A session after his statement) - the one about it not being about race or religion - the focus of its (the BBC's) reporting of this part of the story:

Queensland Police have arrested a 29-year-old French national, who was taken to hospital with non life-threatening injuries.
Deputy Commissioner Steve Gollschewski said the attacker appeared to have acted alone.
"This is not about race or religion. It is individual criminal behaviour," he said.
He said police were aware of the alleged comments of an "extremist nature", but were investigating several possible motivations, including mental health issues and drug misuse.

That particular focus, obviously, echoes the sentiments contained in the report's opening paragraphs.

The rest of this new report focuses on Mia - her life and her personality.

The BBC News website seems to me to be behaving as if it has an agenda here. But what agenda, beyond the familiar, ever-present 'It's nothing to do with Islam' angle?

What are the BBC doing here?
The heavy whiff of BBC manipulation seems to be at play here, yet again - especially in this latest website report.