And now for something completely different (sorry)...

Bells rarely sound melancholy to me - even the ones I heard last Sunday, floating over the fields from St. John's Church, Silverdale.

We were busy sticking our family nose into the garden of the late Victoria Wood's old house, situated on an out-of-the-way lane leading down to a lovely cove overlooking Morecambe Bay (house price guess: £400,000?), when they wafted our way. R Victoria would have heard them often.

Even the single note ones associated with a certain kind of funeral strike me as more consoling than depressing.

My newly-arrived 'Complete Poems of John Keats' (thank you Amazon) featured a particularly fine poem with a very different take on church bells. (I stumbled across it, accidentally, on first-footing). I suspect Richard Dawkins (who I know is a fan of Keats - though I've never heard him mention this sonnet) might like it too: 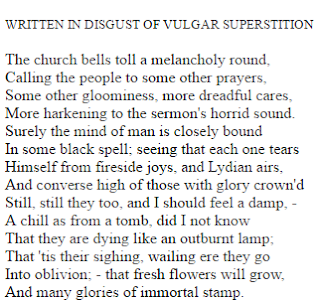 In my mildly militant atheist mid-Twenties, I'd probably have adopted that as my poetic anthem, had I known about it. Now, however, I feel 'melancholy' and 'gloomy' that, two hundred years after Keats predicted it (he was a bit premature), the Church (namely the Anglican church) does indeed seem to be dying like an outburnt lamp - and abruptly too. So abruptly, in fact, that it really can be called 'a collapse'. (The stats prove it).

More generally, the sea of faith's "melancholy, long, withdrawing roar" is draining away at a rate probably not seen ('wildly speculative historical guess' alert!) since the Romans lost their faith in Jupiter & Co. It's apparently even withdrawing at some considerable speed in the USA now...

...though in plenty of parts of the world, the sea either remains where it was or (the Muslim world especially) is attempting to be a tsunami.

What of  Keats's "fresh flowers" and "many glories of immortal stamp"? I'm guessing he was hoping nature and art would be the drivers of a new and truer spiritual awakening. That still doesn't seem to have happened, and probably never will (though, like Bartok, I'd happily cross myself in both of their names - if you added science and made it a trinity).

Instead, here in Team GB Land (the Land of Gold), we've got barely-even-half-hearted claims of familiar Christian beliefs from many (hordes of whom still tick the 'Christian' box in the census - including most of my family), plus quite a bit of on-the-hoof spirituality (new paganism included), a small but noisy atheist battalion (plus quieter hangers-on, like me), a benign smattering of believers in Judaism, Hinduism, Sikhism, etc, and a dramatically-swelling contingent of Muslims, many of whom are more than happy to fall under their religion's own "black spell" and some of whom, alas, seek to cast that spell over the rest of us too. Their tide still seems to be coming in.

Were he alive now, would Keats, like me, now feel in need of those church bells (which so dejected him at the time) to lift his melancholy?

Plus the radiator joys and Lydian airs, of course.
Posted by Craig at 20:20