The anti-Israel activities in universities, at the Olympics, in the world in general and the anti-Israel reporting running through the BBC are all pretty overwhelming. Could this ever be turned around?

I’ve been looking at the current thread on Harry’s Place inspired by France’s burkini ban. Some posters are reluctant to condemn conservative Islamic beach-wear while accepting non-Islamic cover-up garments like wet-suits. They don’t wish to be hypocritical.

Apart from the fact that much Islamic dress is hugely impractical, ridiculous and downright comical, 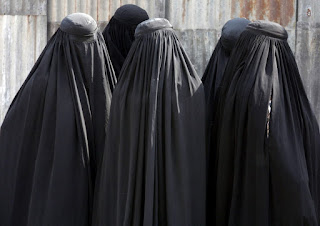 I can’t help seeing it as a uniform which clearly says “I’m in the club.”
The fact that that particular club is exclusive, divisive, and believes its members to be holier than thou is off-putting enough, but the in-your-face flamboyance of the uniform strikes me as an act of aggression in itself. I can’t see the burka as being different in intent from the full jackboot and swastika nazi uniform. The symbolism is there, whether you like it or not. As several commenters attest, it’s a relatively new phenomenon.

Someone (in a comment on EoZ) has posted a video, (which is actually on YouTube) allegedly filmed in some faith school somewhere in the UK. If this is genuine, and I don’t want to be hypocritical either, I can unequivocally admit that I am horrified.

It’s been quite a while since Channel 4 aired ‘Undercover Mosque’. It’s high time the BBC caught up.
Posted by sue at 21:58