I don’t know if the Chakrabarti peerage debacle has dropped off the front pages for good, but the odour lingers on.
Being offered a peerage just after concluding that there is no institutional antisemitism in the Labour Party doesn’t look good, whichever way you look at it. 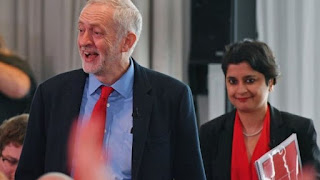 The BBC has been reporting that ‘Jewish leaders” or “the Jewish community” have been making a fuss about Shami Chakrabarti’s peerage, as though Jews are the only ones troubled by this ‘cash-for-questions’ type scandal.  Continually quoting Ephraim Mirvis, the Chief Rabbi, who said that the “credibility of her report lies in tatters” has a Mandy Rice Davies ‘they would say that, wouldn’t they’ ring to it.

However, others are criticising Corbyn for slightly different reasons. They point only to the clumsy and untimely nature of his nomination. They feel it’s hypocritical to participate in a system he abhors. Claiming that Ms. Chakrabarti will work tirelessly against that abhorrent institution from within is a weak as Corbyn’s explanation for befriending Hamas and Hezbollah.

The BBC published an article yesterday about Labour’s deputy leader Tom Watson declaring it a “mistake”, and saying “The timing is not great for the Labour Party”.

This piece in the Telegraph says that Keith Vaz has written to Ms Chakrabarti to ask whether she was offered the peerage before she published the report.

I’m not sure that makes a lot of difference. Here’s an excerpt from a comment on Harry’s Place:

People such as Keith Vaz and Wes Streeting who are focusing on *when* the peerage was offered may be giving Corbyn a way out. Their view seems to be that the peerage is questionable if it was offered before or during the inquiry, but not if it was offered after. But it's actually questionable in all three cases.
We don't see people going around saying it matters exactly when Cameron offered his "cronies" honours, do we? No. It's seen as questionably rewarding them for whatever they did regardless of when it was first discussed.

The fact that the inquiry is largely considered to be a whitewash makes all the difference. There is no ‘way out’ for Corbyn. Whether it was a whitewash because Chakrabarti was afraid of jeopardising a promised peerage, or whether the peerage was a gratuitous bonus for doing the laundry, it hardly matters.
Either case looks bad. Accepting the peerage demolishes Ms. Chakrabarti’s integrity (for what that’s worth)  and unnecessarily shoves a motive into the full glare of the headlights. It undermines any semblance of objectivity that she might otherwise have claimed for her inquiry and its dubious conclusion. 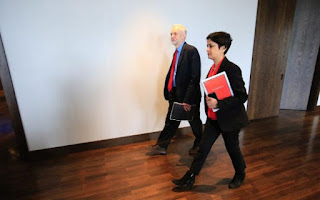 Although some surprising names were amongst those who endorsed her appointment, her impartiality was compromised from the get-go.  She was well-known for her support of Moazzam Begg who has stated that Israel’s crimes are worse than the Taliban’s, she even described Begg as 'a wonderful advocate for human rights and in particular for human liberty'.

“Ms. Chakrabarti can claim no particular expertise on the subject of anti-Semitism.  She formerly headed the campaigning organisation ‘Liberty’, a body that militates – among other things – for unrestricted freedom of speech, including the freedom to publish vile racist rants.”

We haven’t seen quite so much of Ms. Charkabarti on the BBC recently, but once upon a time she was on our screens all the time. She earned the title ‘universal Shami’ for her numerous appearances on QT and at least one awkward episode of HIGNFY. Not naturally quick witted, she struggled to keep up.

Having avoided answering a direct question about the offer of a peerage put to her by Kirsty Wark on a recent edition of Newsnight, she did much the same thing, aided by a glass of water, during this cringe-making performance on J-TV.

Jeremy Corbyn and Diane Abbott believe that Ms Chakrabarti is top-notch lawyer, highly intelligent and with a brilliant mind, and as such will be a great asset to the House of Lords.

Mind you, judging by the recent HoL debate on ‘Palestine: Children’ I watched recently, it wouldn’t take much brilliance to be an asset to that institution. The ability to read out loud would do.

Someone else who is enthusiastic at the prospect of Shami joining her on the benches of the upper house is Baroness Butler-Sloss.

Yes, that Baroness. The one who was forced to step down from another shambolic inquiry not so long ago. Keith Vaz had something to say about that, too.

“The whole inquiry process is becoming shambolic: missing files, ministers refusing to read reports and now the chair resigning before the inquiry is has even commenced."

That isn’t the first time the good Baroness stepped down. She resigned from the Princess Diana inquest in 2007.

“BBC royal correspondent June Kelly said Lady Butler-Sloss' decision was a "bombshell". "This really is a saga now and the fact that you are now going to be on your third coroner I don't think anyone could have foreseen this," she said.The former Royal press secretary, Dickie Arbiter, told the BBC he was not surprised by Lady Butler-Sloss' resignation”

“I have known and admired Shami Chakrabarti for many years. My daughter is chairman of Liberty and I have seen the work Shami has done for that organisation.I have felt for some time that she would be a valuable addition to the House of Lords.
As an independent peer I welcome her nomination and  am delighted that she will join us. I have no doubt that she will make many most useful contributions to our debates.”

I posted this piece at 20:52. About 40 minutes later I noticed Harry’s Place has put up a similarly illustrated piece about  Shami Chakrabarti’s (lack of) credibility.

A link in a b.t.l. comment takes us to this article, in the Guardian no less, headed:

Friends of Al-Aqsa gave Corbyn’s team a cheque for £10,000 in August 2015, an investigation by this newspaper has found, although the gift has never been made public.

Corbyn’s campaign said it did not declare the donation because its bank subsequently rejected the cheque as it was made out to the wrong person. Any donation above £7,500 should be declared to the Electoral Commission.


A spokesman for Corbyn was unable to explain on Saturday what then happened to the cash raised. A spokesman said: “I’m told a second cheque may have been sent but this was not received by the campaign.”

Yet more evidence of the Labour leader’s incompetence and duplicity. We'll have to wait and see if the BBC reports it.