Further to a post here on Saturday night, the ever-excellent Daphne Anson has published a piece called Something To Do With Islam: The BBC befuddles British schoolkids.

Exploring further, Daphne looked at the Test at the end of the Crusades section of BBC Bitesize's medieval history course and found this question, which she rightly calls "childish": 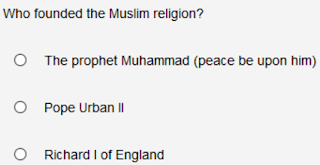 Note that Muhammad got a "peace be upon him" bestowed upon him there by the respectful BBC.

She also provides neat little example of the BBC making a 'value judgement' on a political issue:

One of her readers put in a complaint about that and got a swift reply from the BBC (which you'll have to click on to enlarge and read, as our blog isn't wide enough!):