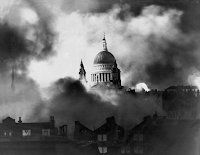 I'm going to go seriously 'off topic' myself here again.

I wasn't intending to, but today's Making History on Radio 4 included such a delicious (and delightfully alliterative) historical exposition (courtesy of the librarian at St. Paul's Cathedral) that I thought I really ought to attempt to be public-spirited and transcribe it for you (and for posterity too)... 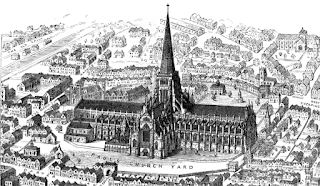 Of the old St. Paul's I knew very little, except for its dull-looking spire-free image on fairly crude contemporary drawings from late 16th/early 17th Century London (see below rather than above).

It first gave some facts about the Great Fire itself.

That big old bonfire raged for four days, destroyed more than 13,000 houses, made some 70,000 people homeless, and wiped out 87 parish churches.

Well, that had been consecrated in 1240. So, even without having recourse to a calculator, I worked out that it had been standing for some 426 years before the Great Fire struck. (BBC Bitesize would be so proud of me.)

In conversation, Making History historian Dr Tom Charlton and the cathedral's Head of Schools and Families Donna McDowell described its state in the lead-up to 1666, and it sounded to be in a very sorry state indeed.

Some of this, they told us, could be put down to the effects of the English Civil War, which left it in a poor state of disrepair.

Also, it had been struck by lightning (in 1561) for the second time, which destroyed its mighty and magnificent spire. And no one had repaired it.

(The programme didn't make the date of that clear, so I had to check Wikipedia. I'd wrongly assumed, from what they'd said, that it had been struck in the years of [or the years surrounding] the Civil War).

Donna McDowell noted that the interior was in quite a state too.

It had been used as a cavalry barracks by Cromwell's soldiers at one stage, with horses regularly hoofing in and out. 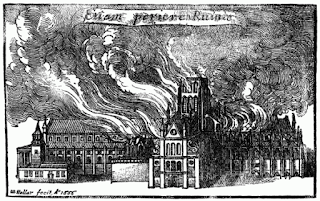 That was all very interesting, but what really grabbed me was the contribution of  the present day St. Paul's librarian Joe Wisdom.

He's a man who can really tell a tale:

Joe Wisdom: I think the feeling, before the fire, was that St. Paul's and churches were safe places.

And the stationers (the booksellers), whose properties were very much adjacent to St. Paul's and in the surrounding streets, stuffed their stock into the crypt of St. Paul's.

And they stopped up any gap to stop sparks getting into their stock.

Unfortunately, they stuffed it in with bales of cloth as well.

John Evelyn was one of those commissioned to survey the cathedral in its state before the Fire. And it was only the week before that John Evelyn was here with Wren and some other surveyors, and they'd come to the conclusion that they were going to put a cupola (or dome) on top.

So the cathedral was actually in a ready state to be repaired. And that was just under way.

So you had a line of flammable material set up, if you like, around the cathedral. Couldn't have been better if you like fires, but...

Tom Charlton: And it was Christopher Wren's scaffolding?

Joe Wisdom: It was Wren's scaffolding, absolutely. Ignited material hit the lead roof and the roof then fell through, dropping through to the crypt of St. Faith, breaking through the cathedral floor.

So you then had flammable goods which, it is said, burned for about a week in fact.

One of the scholars of Westminster School indicated that by the light of the burning St. Paul's he could actually read his copy of Terence that he had in his hand, over in Westminster. So the light was that tremendous.

If he hasn't already written a book, Mr Wisdom should write one.
Posted by Craig at 21:49