Did Mark Easton make a beeline today towards Leave voters who come across as uneducated and/or racist? 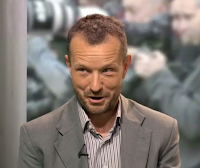 The first post-Brexit edition of the BBC's Newswatch (1 July) featured a complaint that BBC reporters, post-vote, had been "making a beeline" to film Leave voters "who come across as uneducated and/or racist". The complainant called that "unhelpful".

The BBC's Head of Newsgathering, Jonathan Munro, dismissed this charge and implied that it was in fact the complainant who was actually engaging in unhelpful stereotyping:

Exhibit A in the case against the BBC was an Ed Thomas report for BBC One's News at Ten which focused on the fears of Eastern European migrants in Leeds juxtaposed with the views of various anti-immigration voters, including a self-declared fascist with 'England' tattooed on his neck and a swastika tattooed on his eagerly-displayed biceps. The latter provoked most controversy with Newswatch viewers, but Jonathan Munro protested the BBC's innocence over it and implicitly criticised Newswatch for even raising it:

In the clip you showed at the beginning of the compilation you showed one interview with a gentleman with a swastika tattoo. That was filmed in Canvey Island for an edition of the Ten O'Clock News a couple of nights ago. We ran two reports on that programme talking to ordinary people in ordinary walks of life - one from the north-east of England and the other from Canvey. I think in those reports we must have interviewed 10, 11, 12 different people. One of them was a tattoo...You chose to show that. I don't think that was a representative sample at all of what we did, and if you look back at the programme the vast majority of people in those two reports were would you might call, to be honest, normal, everyday, ordinary people with perfectly valid and honourable intentions, whichever way they voted.

Mr Munro was so confident-sounding that I initially missed the fact that he was factually incorrect.

Yes, there was a report from Canvey Island that night but "the gentleman with a swastika tattoo" didn't appear in it. He was in the other report - the one from Leeds.

And watching that report again suggests that Mr Munro was being somewhat disingenuous.

Besides Swastika-Guy, the two other "everyday, ordinary people" who voted Leave and were selected as 'vox pops' in that Leeds report were (a) "a second-generation immigrant...frustrated at Europeans arriving in a place he calls 'home'", and (b) a chap called Wayne who wants migrants to "go home....as soon as possible" and who was led by Ed's leading questions and narrative build-up into sounding like a racist empowered "by the Brexit vote".

(Click on the link above to see for yourselves).

I remembered this Newswatch exchange after watching tonight's News at Six.

It was Mark Easton's strikingly biased report on the risks posed by a post-Brexit reduction in EU immigration that brought it back to mind.

Mark 'reported' that agriculture, the hospitality sector, the care sector, construction and the NHS faced serious risks from a post-Brexit reduction in EU immigration. "Shortages" and "collapse" could result, said Mark. (It was a typical Mark Easton report).

He then stopped off in Leave-voting Rochester to canvass the views of three 'vox pops'.

Did Mark Easton "make a beeline" to film Leave voters "who come across as uneducated and/or racist" here? And here's what he said:

I think they should all go back to where they belong really, cos our country's ruined now, innit? There's no houses for us. There's no jobs.

Next came a lady who said:


I'd like them to do what we voted for really, which is to make it much lower, much fairer, a points-based system.

A perfectly reasonable point - though I suspect, like many a viewer, I didn't immediately catch what she'd said as I was too busy gawping at her remarkably unhealthy-looking teeth - quite the worst-looking set of teeth I've seen on TV for many a year.

(I'm sure she's an absolutely lovely person and I feel awful for writing that, but I really don't think I would have been in the minority among News at Six viewers in thinking in such a shallow, unkind way about her teeth).

Then came a pro-immigration voter.... 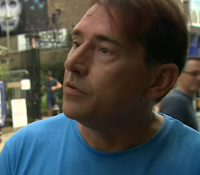 ....who made a longer, more impassioned and much more eloquent case for mass EU migration, echoing many of the points Mark Easton himself was making earlier - though without the veneer of BBC impartiality, of course.

Watching it, I felt just like that initial complainant to Newswatch. It did seem to me as if Mark Easton had very carefully selected which three 'vox pops' he put into his report here. But I could also hear my own inner Jonathan Munro saying:

Am I the one in the wrong here for thinking really bad things about the uneducated-sounding topless guy and the woman with the disjointed, yellow teeth (the two anti-immigration 'vox pops')?

Did no such wicked thoughts cross Mark Easton's mind, even for a single second, when he selected them for his report and then juxtaposed them with an eloquent, 'normal-looking' pro-immigration guy?

And, moreover, what is Emma Jane Kirby's Brexit Street series for PM if not the initial complainer to Newswatch's point writ large?

That entire series so far has been"making a beeline" towards Leave voters "who come across as uneducated and/or racist".
Posted by Craig at 20:31