"Not defending or vilifying it"

The homepage of the BBC News website has a prominently placed new 'The Reporters' piece: 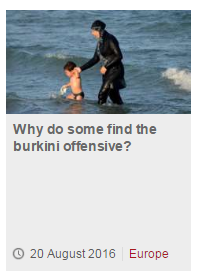 It's by Shaimaa Khalil, the BBC's Pakistan correspondent, and makes the case for the burkini, ending:

But to me, as someone who wore it for years, it has always meant that I could swim, and in that was a freedom that I still remember and am still grateful for.

Her piece has provoked a heated debate on Twitter, in which she's been participating. There's not been much of a meeting of minds.

Curiously, however, she seems to believe that her piece doesn't take a biased position on this sensitive issue. 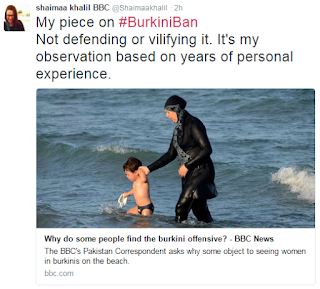 I doubt anyone reading the piece would seriously think that she's anything other than against a burkini ban though.
Posted by Craig at 12:32