The BBC and half the story

She sent out 6 tweets in quick succession: 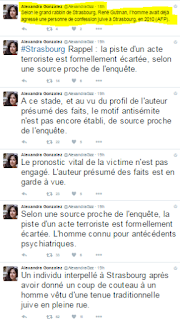 including the one highlighted above:

According to the Chief Rabbi of Strasbourg, René Gutman, the man had assaulted a person of the Jewish faith in Strasbourg, in 2010 (AFP).

So the BBC reporter who wrote that report, and linked to her tweets in it, must have read that particular tweet too. (It's impossible to miss.) It was tweeted at the same time.

That BBC reporter must, therefore, have consciously decided not to report it - even though it is obviously highly relevant to the story.

That, surely, is dishonest reporting.

The BBC report has not been updated since it was first published.
Posted by Craig at 07:43