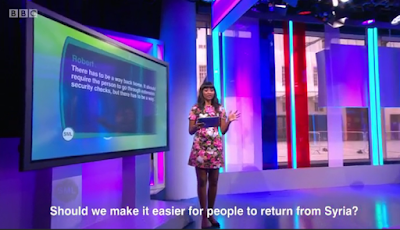 The opening discussion on this morning's Sunday Morning Live was just about as typical of the BBC as you could get.

(Most of the viewing public will probably have thought, "Of course not. What a stupid question!")


Secondly, there was a complete 'BBC' imbalance of guests on this kind of 'sensitive' subject. This time it was 4 on one side (Hifsa Iqbal, Ajmal Masroor, Kiran Bali and Owen Jones) and just 1 on the other (Nick Ferrari).

The heavy imbalance, you won't be surprised to hear, was in support of the 'soft' approach raised by the 'BBC' question and towards sympathy for the likes of young, 'brainwashed', 'groomed' Kadiza. (The internet is to blame, it seems).

Still at least Samanthi Flanagan, the interactive reporter reading out the selection of viewer tweets, emails other other messages this week (pictured above), was open about the fact that most viewers were agreeing with Nick Ferrari. She then read out a selection of the blandest, from both sides.

Reading the programme's Twitter hashtag (#bbcsml), the negative response to the question was in fact absolutely overwhelming. The cries of "No!!" to the BBC's question were many and various.

Unusually for Twitter, Owen Jones was getting most of the criticism and Nick Ferrari most of the praise. There were very few expressions of sympathy for the late Kadiza and very few bought the prevailing 'brainwashing' line.

And there was a fair smattering of criticism for the BBC itself for having such an unbalanced panel and for 'pandering' to Islam.
Posted by Craig at 12:15